What Is Lung Cancer? Its Causes, Stages And Prevention

Lung cancer is the leading cause of cancer related deaths in men and the second common in women after breast cancer. Lung cancer kills nearly 158,000 more American people every year than breast, colon and prostate cancers combined.

What Is Lung Cancer

Lung Cancer is the formation of malignant tumor through carcinogenesis, in the lungs which can than metastasize into other regions of the body.

The two main types of lung cancers are

Small Cell Lung Cancer SCLC accounts for only 15 percent of lung cases in America and tend to be more responsive to chemotherapy than non-small cell lung cancer. They also advance to the nest stage relatively faster than a NSCLC.

Lung cancer is rarely detected at stage 1 or 2 due to the non specific symptoms like fatigue and coughing, which the patient often attributes to other causes.

One of the first lung cancer reports was by Adler in 1912, who found 374 cases of primary lung cancer from United States and Western Europe. It was only representative 0.5 percent of all cancer cases. He concluded that it was ‘among rarest forms of disease’.

It was Hruby and Sweany who collected 185,434 autopsy reports from 1897- 1930, which lead them to a conclusion that during these years lung cancer increased disproportionately as compared to the incidence of cancer in general.

The long effort of proving tobacco usage as a risk factor for lung cancer began with Pear (1938) who showed that cigarette smoking was associated with premature death. Other findings included that tar applied to animal skin produced lung carcinomas.

Doll and Hill, and Wynder and Graham (1950) in separate epidemiological studies established smoking as a causal factor for bronchogenic carcinoma. Wynder and Graham also concluded that there could be a lag of 10 years or more between cessation of smoking and the onset of carcinoma.

The milestone effort to highlight the effects of smoking tobacco was when in 1964, the United States public health service published a report which concluded that cigarette smoking increases the age specific death rates of men by 70 percent but showed a comparatively lesser effect on women.

It also claimed that there is a causal relationship between smoking tobacco and lung cancer. How much a person smokes and how many cigarettes smokes directly increases the person’s risk to develop lung cancer.

The report observed that a heavy smoker has 20-fold risk for cancer whereas an average smoker has only 10-fold chance of developing lung cancer. Cigarette smoking was also at that time more important than occupational exposure for developing cancer.

Generally smoking was the major cause of chronic bronchitis in the US and male smokers had higher death rate due to coronary heart disease than non smokers.

The publication of that report did decline the per year consumption of cigarettes in US but not by a great degree. Over the years the smoking rates rose from 27.5 percent to 36.4 percent, from 1991 to 1997. The smoking declined to 21.9 percent in 2003 and then again declined to 19.5 percent in 2009.

Tobacco smoking was rare before the 1800s, and was predominantly in the form of pipe smoking and chewing. Cigarette wrapping machinery in mid-1800s changed this by making cigarette rolled tobacco widely available. In 1900 the average number of cigarettes per male adult in a year was only 100.

Cigarette smoke is made up of aerosol containing gaseous (400-500) and particulate compounds (3500). Mainstream smoke is what the smoker inhales and the side stream smoke components (produced by smoldering of cigarette between puffs) is the source for environmental tobacco smoke (ETS).

Primary smoke is heavily concentrated with tar and nicotine. It also contains potential carcinogens such as polycyclic aromatic hydrocarbons (PAHs), N-nitrosamines, aromatic amines and other organic and inorganic compounds like chromium, arsenic, and benzene.

The international agency for research on Cancer (IARC) has identified potentially 50 carcinogenic compounds in cigarettes. They can also contain radioactive materials like radon and its decay products (polonium and bismuth).

All of these compounds can alter the DNA and RNA in the cells and can activate cancer causing genes or deactivate the cancer suppressors in the cells.

One in nine smokers sooner or later develops lung cancer. 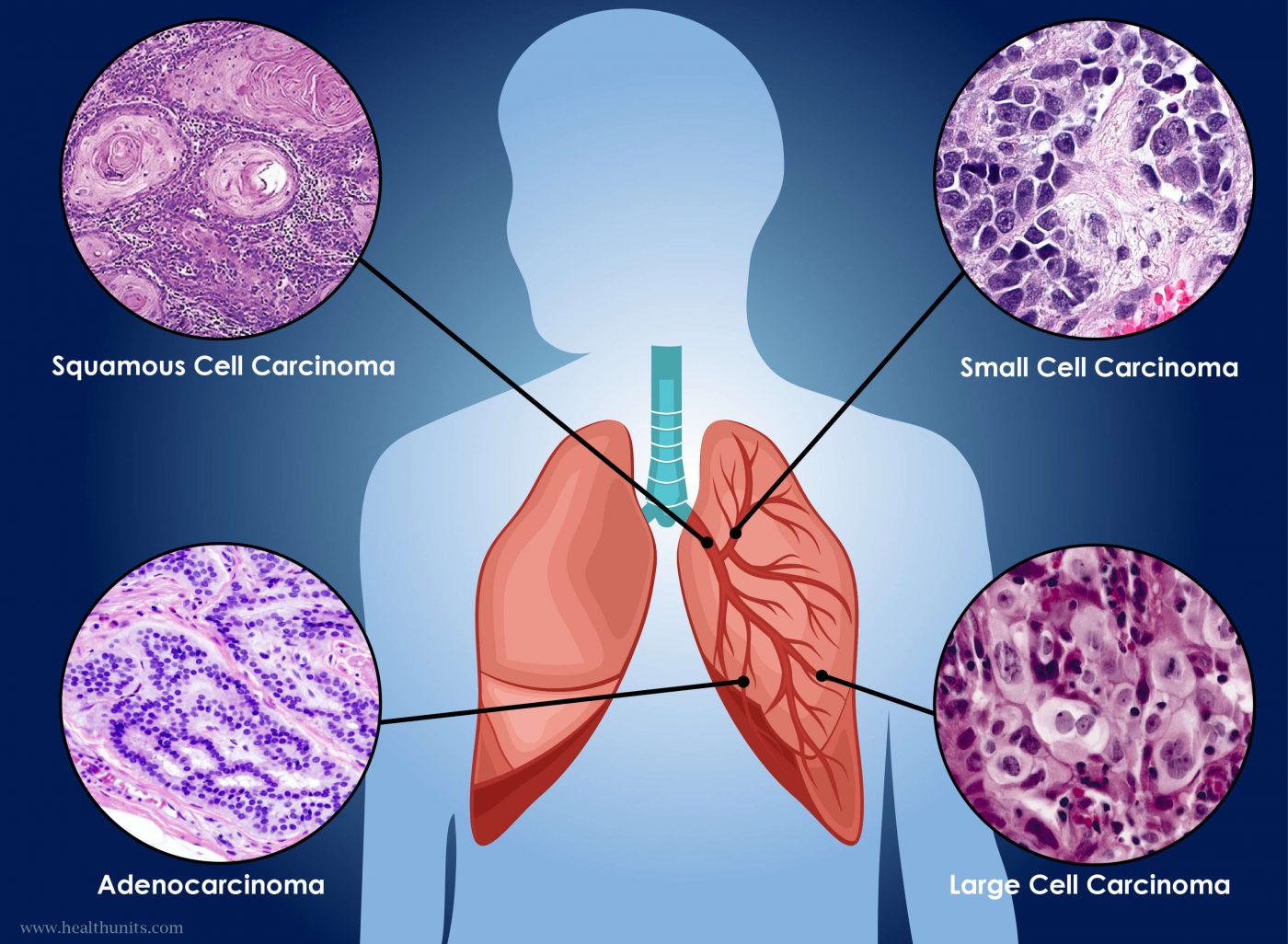 Other forms of smoking tobacco can also increase the risk of lung cancer. A prospective study found that the rate of developing cancer in cigar smokers was at 5.1 as compared to non cigar smokers.

Smoking drugs like marijuana can increase the risk for lung cancer by 8 percent according to a case control study, after adjusting for cigarette usage.

A clear association between inhalant drug usage and lung cancer has not been established.

What Is Lung Cancer? How Do Never Smokers Get It?

If never smokers, people who have smoked less than 100 cigarettes in their lives, are considered separately they would rank as the seventh most common cause of cancer death worldwide.

It is a staggering statistic and research has seen that non smoker women are affected more than men and it is prevalent more in certain parts of the worlds, such as Asia.

Although no associations are 100 percent proven to be a cause for lung cancer in non smokers but theorized causes are second hand smoke, radon exposure, and environmental exposures like asbestos, and arsenic.

Other factors can include genetic factors, occupational hazards and health history.

Environmental tobacco smoke (ETS) or second hand smoke often shows dose-dependent relationship between the degree of exposure and the relative risk. A summary analysis of epidemiological studies showed that there is an excess risk for lung cancer of 24 percent in non smokers who lived with a smoker.

IARC and the US environmental protection agency classify ETS as lung carcinogenic compound I terms of its constituents.  ETS can consist of both mainstream and side stream smoke. Various identified carcinogens in ETS are benzene, benzo pyrene, and NNK. 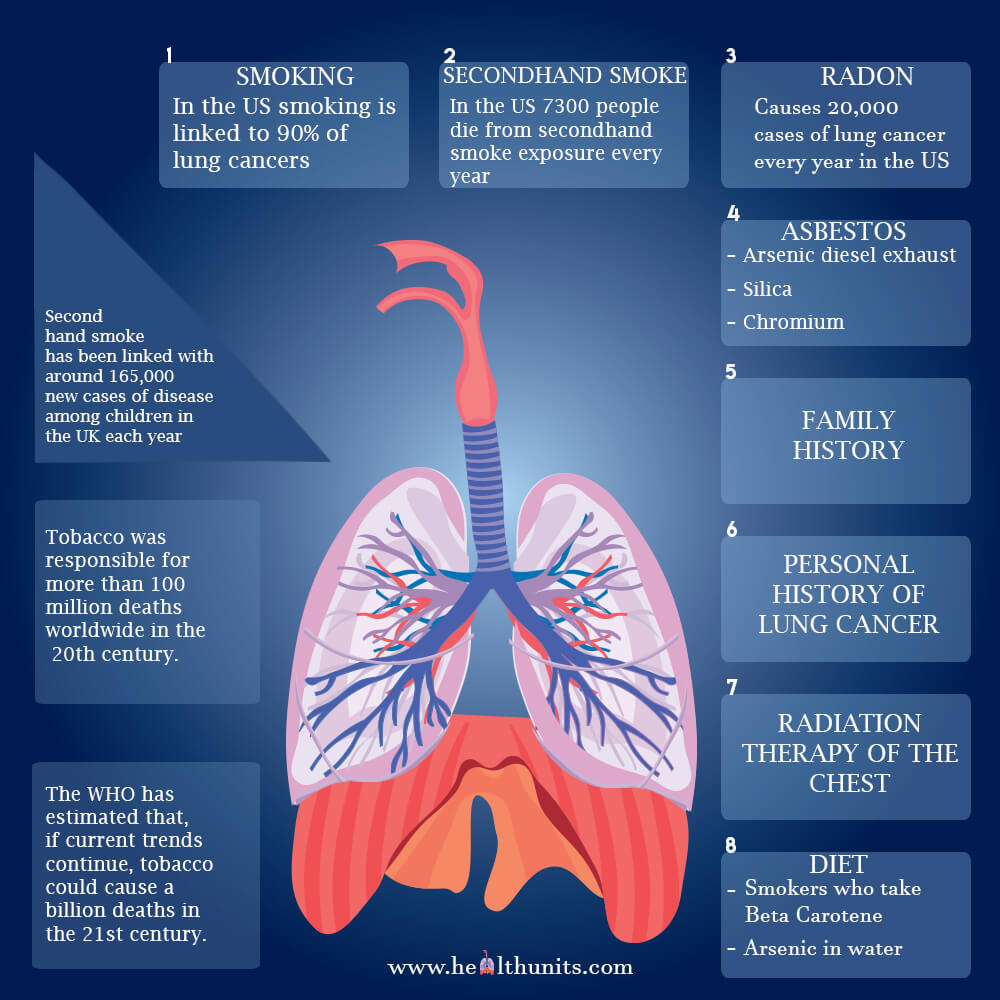 In a surprising finding, Prikle and colleagues found that 88 percent of non tobacco users had detectable levels of cotinine in their serum which is a metabolite of nicotine. Thus smoking is a public health issue and efforts to control ETS can lead to decreased incidence of Lung Cancer, in theory.

Whats Causes Lung Cancer And What Are Biological Factors

Studies on familial aggregation, cancer susceptibility genetic markers, and rare mendelian cancer syndromes have shown association of lung cancer with genetic causes. People with lung cancer susceptibility, if they smoke may be at even a higher risk level, for developing the disease. No subgroups have been currently identified as genetically high risk for specific interventions for smoking prevention, cessation, and screening programs.

Over the last 40 years the rate for new lung cases has decreased by 28 percent for men and has increased by 98 percent for women. More men are diagnosed each year but more women actually live with the disease.

The difference based on genetic susceptibility of different genders may be dependent upon metabolic activation of lung carcinogens or differences in hormonal levels and nicotine metabolism.

Also, lung cancer is more common in non smoking women than in men. In a study researcher Zang and Wynder found that the proportion of women was 2 times more than that of non smoker men. The reasons for which, still needs a lot of research.

Smoking prevalence is lowest among people aged 65 and above at 9 percent but more than 65 percent of patients who have been diagnosed of lung cancer are 65 and above. The mean age of diagnosis is 70.

Research into these factors also found that diet is responsible for 30 percent of all cancers. Low serum levels of antioxidants have been associated with the development of lung cancer.

Several environmental factors are associated with development of lung cancer air pollution is one of the most important determinants for lung cancer.

A case control study showed that relative risk for lung cancer of people exposed to a fixed amount of nitric oxide (measure of traffic air pollutant) was 1.44. Despite multiple studies it is very difficult to find the carcinogenic effect of each individual constituent of air pollution.

Common pollutants can be nitric oxide, sulphur oxide, and benzene.

Chemicals like radon, nickel, vinyl chloride, silica, cadmium, choloromethyl, ethers, chromium, arsenic and asbestos have been identified by the IARC as carcinogens. Exposure to these elements especially due to occupational hazards can cause lung cancer.

Transformation of normal cells into malignant tumors (Carcinogenesis) can happen due to changes at a molecular level. Changes such as genetic, epigenetic, and DNA damages can be responsible due to any of the above mentioned factors.

Lung cancer can be prevented through control of environmental tobacco smoke, exposure to toxic and cacogenic compounds, along with early detection, chemoprevention, treatment of disease and smoking avoidance.

The major association of lung cancer is with smoking tobacco with an attributable risk of 85 to 90 percent and a relative risk of 20-25 percent.

Prevention of lung cancer therefore can directly be related to cessation of smoking cigarettes. Even though intensive and widespread antismoking campaigns currently work in United States there is a group of 19.8 percent population of America, who are devoted smokers. In 1990 the cessation of smoking halved the number of anticipated lung cancer cases. For men, who ceased smoking at ages 60,50,40,30 years, the risk of lung cancer at the age of 70 went to 10, 6, 3, and 2 percent.

Chemoprevention (a term invented by Sporn and colleagues) describes a preventive measure to treat a person in the early stages of carcinogenesis. It uses specific, natural or unnatural, dietary or pharmacological agents to interfere with the development of cancer cells by preventing DNA damage that initiates a tumor or by stopping the progression of premalignant cells in the lungs.

Lung cancer has taken the life of many, some were those we loved. The most notorious disease on the planet hasn’t been too kind to the famous people who have influenced the masses. The deaths of these personalities brought tears into the eyes of many and some of them were:

There’s a saying that if your will is strong enough then even the strongest tides can’t shatter you. Cancer might be the most potent illness ever know to man, but there are few strong humans who dared to look at this disease straight in the eyes.

Ramla Sahib Din is a dentist by training but by passion she is a health journalist. With her varied experience in reading and writing, philanthropy and clinical practice, she sees global health care system as a tool to eradicate pain and suffering, while spreading wellness and happiness in an individual's life.

Whole Grapes Can Cause Choking In Young Children

The Smith Cancer Saga — Can Cancer Be Cured Naturally?

Are We Winning The War Against Cancer?

Can Nutella Cause Cancer?