Diabetes Meal Plans For Those Suffering From The Disease

Though diabetes is giving a tough time to hypertension and cardiac diseases, yet the fancy food choices of human species has made its preponderance irrefutable. If you are victimized by the availability of fancy food choices and their hawkish advertisements, then you surely have experienced a concussion where you would end up making a bad food choice for yourself.

The science of food types, quantities and portion sizes are so confusing that a normal person would land in to a state of binge eating. Above and all, if you are a diabetic and are unaware of this whole world of nutrition, first and foremost is to understand the absolute relationship between your disease and your food choices.

If you are a diabetic then the diversity in foods can make a significant impact on your life but if you learn to choose foods that are good for you and learn to calculate portion sizes then the main issue faced in diabetes i.e. the high blood sugar levels can be managed to a great extent.

Now coming towards the most talked healthy plate concept. Healthy eating plate is basically a calculated estimation of ‘what’ and ‘how much’ of the food that should be eaten by the diabetics on a daily basis in each meal.

It suggests putting imaginary lines through your eating plate and dividing foods accordingly into small portions with respect to major food components. The broader characterization includes filling up:

The detailed guidelines for the healthy diabetic plate provided by American Diabetic Association (ADA) are given below:

Know The Glycemic Index Of Foods

Beware of Glycemic index as it is the base for the food chosen by diabetics. You might be wondering how? Let us help you in putting the speculations and confusions at rest. It is known that naturally some foods have high glycemic index and when you consume them your glucose spikes and random blood glucose level is noted high. Therefore, Pancreases has to work more by producing more insulin.

But diabetics have a problem and they can only produce little or no insulin at all.  So, in order to stay away from all the trouble, diabetic meal plans are structured in a way that includes foods with low glycemic index.

Another concept that needs to be understood whilst learning diabetic diet planning is the glycemic load of foods. It is a very simple and practical method to check the glycemic index of certain foods. It reflects the extent of the increment in the blood-sugar levels as soon food is consumed.

It can easily be calculated by the help of a simple equation which works by multiplying a food’s Glycemic index in percentage by the number of net carbohydrates in a given serving. It can be mathematically indicated by the following equation:

It should be noted that the net carbs are equal to the total carbohydrates minus dietary fiber. 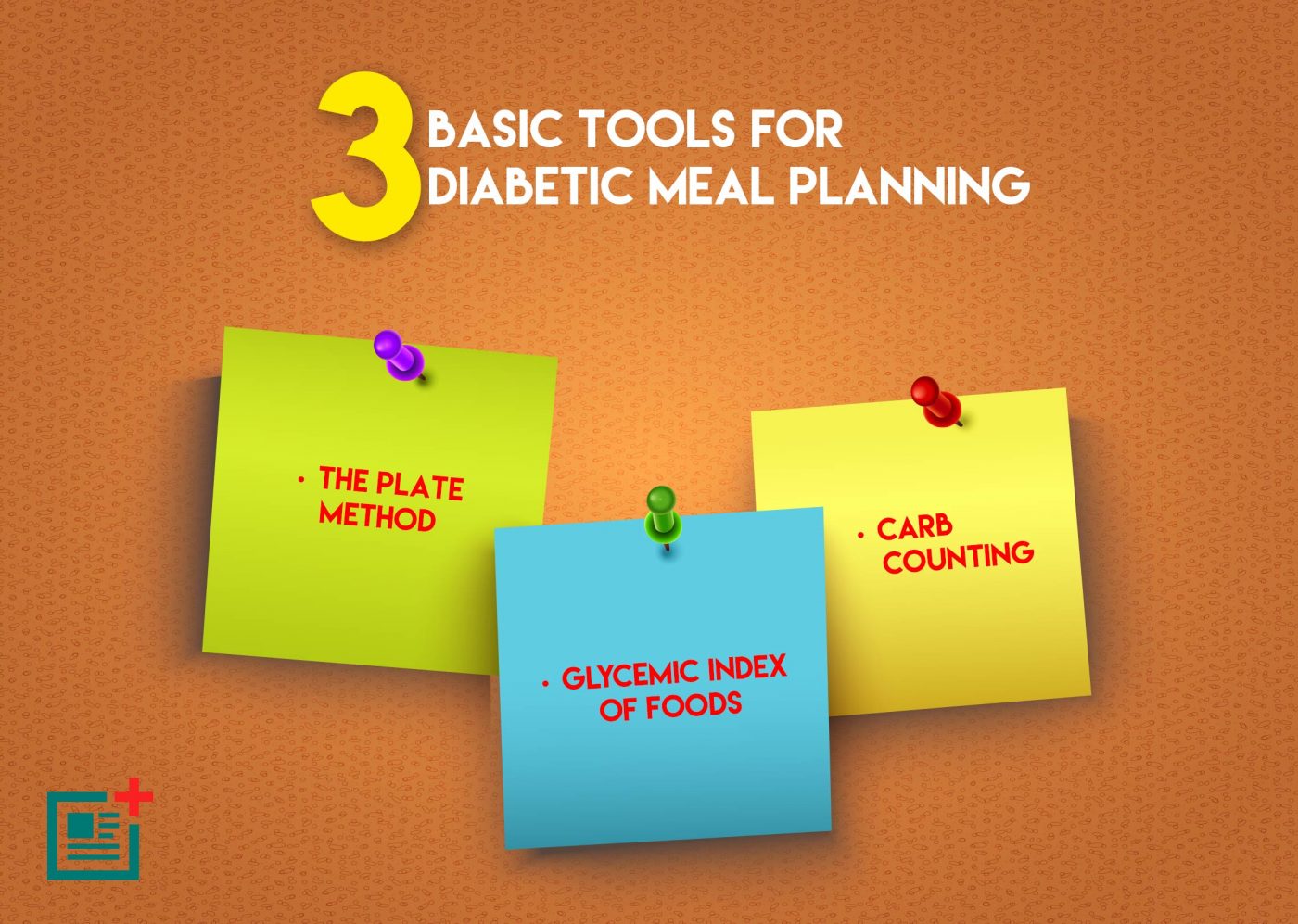 Another important point that needs to be addressed regarding meal planning for diabetics is the sugar content from different foods. It is a common misconception regarding sugar content in diabetics that artificial sugars are the sole culprits behind raising blood glucose levels. However, other carbohydrates also play an important role.

Sugar is only one form a carbohydrate that raises blood glucose, therefore nutrition labels on foods should be read carefully and the type of food source being consumed should be identified correctly to keep the sugar level under check.

It is observed that diabetics can keep their blood glucose levels on the right track by substituting carb-containing foods with small amounts of sugars. However, the ADA suggests that it does not give diabetics the green signal to consume all the sugars they want. Moreover, it is recommended to keep sweets reserved for special occasions with the routine diet of diabetics containing nutrient-rich foods e.g.,

Another effective way to keep the blood glucose level under control is by substituting small portions of sweets with other carbohydrates in the diet. This tip can be useful for diabetics who splurge on sugary foods.

It should be noted that these sweeteners including white sugar, cane sugar, honey, brown sugar, molasses, fructose, maple syrup and agave nectar contain both the calories and carbs. Therefore, these should not be consumed in excess quantities.

According to the ADA, all of these sweets can be swapped with other carb options such as:

The carbohydrate content should be checked by looking for the total carbs on food labels that contain starch and sugar. If you only calculate the amounts of sugar, leaving the starch content aside, then this can become problematic for your blood sugar levels, which one raised would not be coming back to normal any time soon without any medicinal intervention.

Read the basic Carbohydrate article for exploring good carbs and bad carbs options along with carbohydrate counting for the meal planning.

Let us help you to in leading the way to make you understand carbohydrates in detail and the exact method to count them. Since, carbs have a direct effect on the blood glucose levels therefore, the quantity and type of carbs should be chosen carefully to keep glucose levels in control.

Generally, 45-60 gram carbs are recommended at a time in one meal for diabetics. However, the exact quantity varies from diabetic to diabetic according to your blood sugar levels and should be asked from a registered dietitian.

By reading this article you would have come to know that how important is the carbohydrate counting for people with diabetes especially for type-1 diabetics, who cannot neutralize high amount of carbs without artificially administered insulin. Ideally, in perfect scenarios diabetes should try to adopt a low carb diet that is low in carbohydrates. Having said that, Low carb diets help to control the blood sugar levels which otherwise might be subjected to abrupt increase by consuming carb rich foods those which have high glycemic indexes.

One of the very useful tips is to keep the same amounts of carbs each day to keep blood glucose levels under control. Moreover, these should be eaten in moderation as cutting carbs completely out of the diet can have deteriorating effect on health.

Mostly it is recommended to read food labels carefully to count the number of carbs in each food product. But if you are consuming a homemade freshly prepared meal then low carb options should be used that have low glycemic index.

To sum it up, let’s recall that the daily recommended amount of foods containing carbs for diabetics i.e. 45-60 grams of carbohydrate per meal. However, the exact amount of the carbs suggested for diabetics cannot be quantified due to individual differences in the individuals. It is suggested to balance out the high glycemic Index foods with the low ones. Although it is not impossible to calculate the amount of carbs for each meal plan but it is better to get help from a registered dietitian in the beginning.

Since, it was already mentioned about the glycemic index a number of times in this article. Let’s understand this core concept in greater detail. So, glycemic Index (GI) is a measure of the rate at which foods raise the blood sugar level.

Some foods have high glycemic index meaning their consumption can spike up the blood sugar levels immediately. Therefore, foods having lower GI are more suitable for diabetics because sudden shooting of blood sugar levels is adverse and can lead to complications in the absence of insulin. 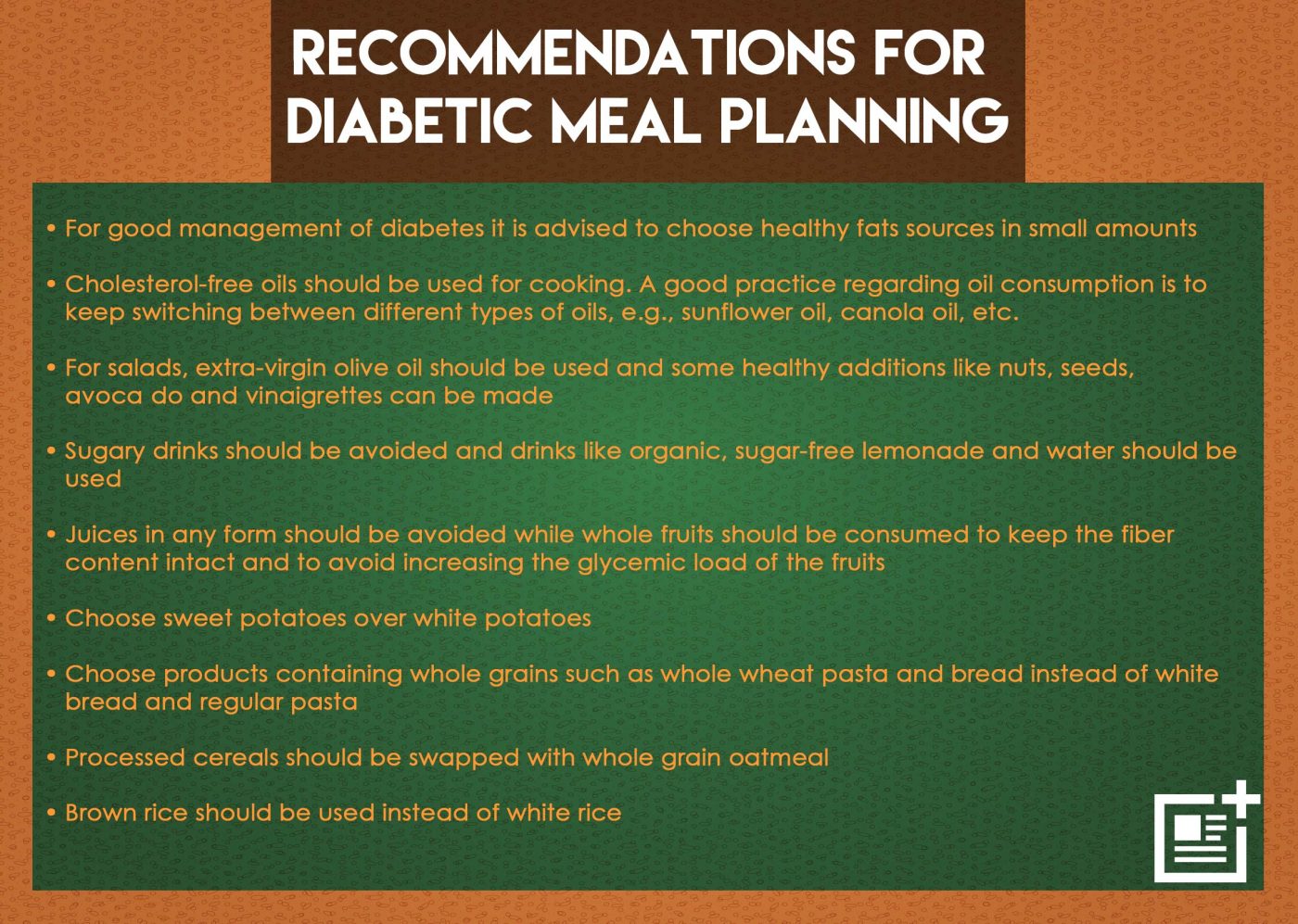 American Diabetes association has divided the foods according to the glycemic index. These include:

The foods which raise blood glucose level up to 56 to 69 are whole wheat, rye, pita bread, oats or rice (brown, wild or basmati).

Other recommendations for diabetic Meal Planning

Other useful tips recommended by ADA for diabetic diet planning are as follows:

Choosing the right kinds of foods and organizing diabetic meal plans can be a crucial job. Therefore, before eating any food, people suffering from diabetes should follow the above mentioned guidelines provided by the ADA.

Moreover, planning advice from a registered dietitian should be taken regarding the exact quantity of each food and for specific diabetic diets.

Dr Fatima Siyal has an MRCP (Member of Royal College of Physicians) degree from the UK. She is a budding healthcare professional and researcher.

What Is Gestational Diabetes? Symptoms, Causes, Diagnosis, Risks And Nutrition