The Dilemma Of Weight Loss In Diabetes

You might have heard that managing diabetes mellitus is not a science, it is in fact, an art. Being diagnosed with diabetes is not the end of the world — if you manage your disease properly with the help of diet and exercise along with your medication, then you can ensure that even though you have diabetes, diabetes does not have you.

A common question in the mind of people diagnosed with type II diabetes is, did my being fat cause the disease or did my disease cause me being fat? Well, the following text will help you determine what exactly the relationship is between the two, or if it is all just a rumor.

Is My Weighing Scale Drunk?

It is no coincidence that many diabetics are obese, nor that many obese people are diabetic. Having a high Body Mass Index (BMI) is a major risk factor for diabetes. Many diabetics with previously undiagnosed or uncontrolled diseases notice an increase in their weight once they start regular medication or insulin therapy.

This weight problem can be managed easily with dietary modifications and medication adjustment. Discuss your concerns regarding weight gain with your healthcare provider, who can allay your fears and answer any questions you may have about your condition.

Some people think that cutting back on insulin or antidiabetes medication can help you shave a couple of pounds in a day or two by increasing blood glucose.

However, treating insulin like anorexics treat food is not a helpful approach at all. It can lead to both long and short-term complications as well as rapid weight gain once the regular dose of insulin is reinstated.

Medications That Increase Weight In Diabetics

There are different classes of drugs that are used to lower blood glucose levels in diabetes which work through different mechanisms of action. Of these, the drugs associated with weight gain are: 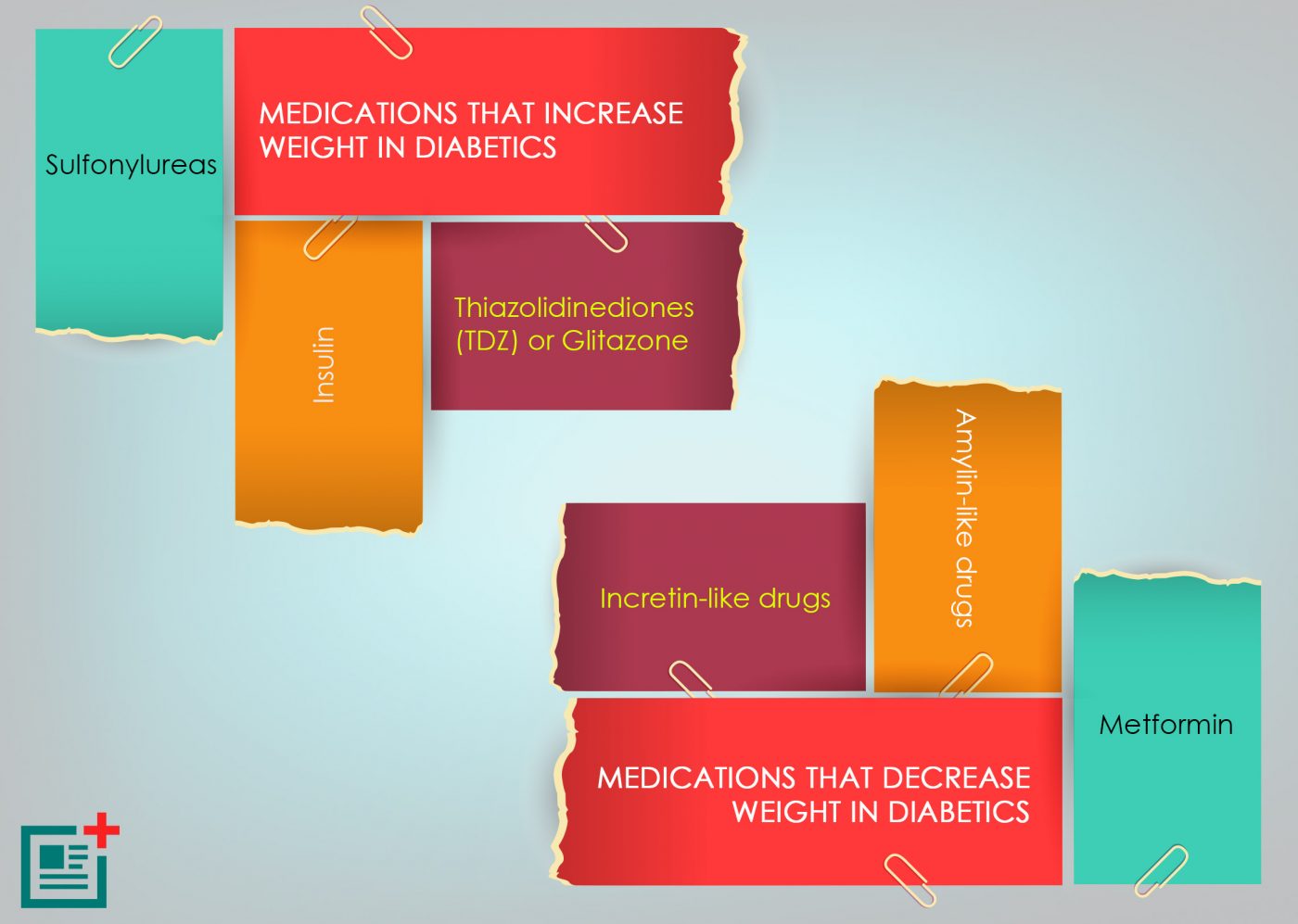 Medications That Decrease Weight In Diabetics:

The newer class of anti-diabetic drugs are helpful, in that, they either cause no weight gain or help decrease weight. These include:

How Does Diabetes Cause Weight Gain?

There is no direct mechanism by which there is an increase seen in the weight of the diabetics. In fact, in unmonitored, or undiagnosed diabetic population there is rapid weight loss, which is due to the loss of blood glucose in urine, and the dehydration that occurs subsequently.

Usually kidneys do not lose glucose in the blood, but when there is hyperglycemia (increase in blood glucose), then the kidneys rid the body of this glucose, and in doing so, lose a lot of water as well. The rapidly dehydrating patient feels lethargic most of the time as he keeps urinating his energy.

HbA1C, referring to glycosylated hemoglobin, is a test that indirectly shows the average glucose levels in the last three months. HbA1C also refers to the combination of glucose-and-hemoglobin. Hemoglobin is a component of the red blood cell that is responsible for carrying oxygen in the body and apparently, is good at multi-tasking, because it also lets glucose join with it.

In undiagnosed diabetic patients, HbA1C, is naturally higher (>6.5%) than normal (<5.7%), while in pre-diabetics its range is between 5.7% to 6.4%. In such individuals, there is weight loss and dehydration consequent to high blood glucose, as mentioned before.

Once the patient is diagnosed and their medication is adjusted, glucose levels are controlled and HbA1C normalizes; the patient then stops losing the excess glucose in the urine and their medication makes the body able to use the glucose by enabling its entry into the cells. The cells either utilize this glucose or store it for future use. Once this starts happening, a perception of  weight gain is created, as the lost energy is gained back.

Mechanism # 2: Eat More Than You Deserve

In diabetic people, administration of exogenous insulin performs the task of decreasing blood glucose. Again, the insulin acts by shepherding the excess glucose into the cells and allowing the body to store it in muscles and fats for use in times of need. Although this is the goal of insulin therapy, the trouble/weight rises when the energy stores exceed the energy demands.

Most diabetic individuals do not increase their daily activities when on insulin therapy, although they should be instructed to do so. As a result of increased calorie intake and less activity, the cells store more than they use—this storage is known as fat.

Hypoglycemia is a common side effect of the aforementioned drugs (sulfonylureas, TDZs, insulin). To combat this and to prevent it from becoming dangerous, diabetics are advised to snack between meals to keep their energy levels up. When allowed to snack between meals, most individuals take it to mean they are allowed to eat candy, crisps and sweets whose effect is seen in the form of an expanding waistline.

Type II diabetics are mostly overweight (about 90%) with one-third of American adults either obese or en-route there. Moreover, when combined with increasing childhood obesity, this number is likely to increase.

Why Me — Those At Risk Of Becoming Huge

About 2000 patients were followed for a period of one year and weight changes were noted — with the average gain of about 4lbs and 24% gaining about 11lbs. Factors which were associated independently with greater weight gain included insulin dose requirement and high HbA1C at the time of diagnosis while insulin regimen was not found to be a risk factor for weight gain.

What Can Help You Maintain Your Weight?

Insulin does not always equal to weight gain. With proper management — diet, exercise and medication — anything can be achieved. Here are a few tips to help guide you towards a better weight control:

ADA recommends “assessing your lifestyle” before you embark on the journey to weight loss in diabetes. Know your current health status and your environment that affects you and your weight loss as it can help you when discussing your health and weight loss plan with your doctor. Assess your BMI to know which category you fall in, and make realistic goals to achieve weight loss.

Know What You Eat

The old adage — you are what you eat — will never leave you alone—because it is true. Make an estimate of your required calories per day based on your activities of daily living, and try not to exceed them and consult a doctor or a dietitian while planning meals.

In a study conducted to see what the effects of Pioglitazone (TDZs) were if combined with portion control diets, it was found that not only did this diet help prevent weight gain, but it also reduced visceral fat as well as weight circumference, when compared with other medications.

TDZs or sulfonylureas are not the only medications used to treat diabetes. Ask your healthcare provider about newer class of drugs, like the ones mentioned above, that do not cause weight gain. Combined regimen can also be considered in resistant cases. If you want to know about all antidiabetic medications read this.

Halle Berry once said, ‘I always had to diet. I’m diabetic, so it’s a lifestyle for me anyway just to stay healthy and not end up in the hospital.’

Be like Halle and make lifestyle changes to manage your disease.

Dr Hira Tanveer has an MBBS degree and aspires to be an MD. Her time in school left her with a deep love of reading and writing fiction. In her spare time, she writes for technical magazines, blogs and other online publications.

Pokémon GO Is The Reason For Increased Roadside Accidents

The World Is Getting Ready To Fight Antimicrobial Resistance

What Is Gestational Diabetes? Symptoms, Causes, Diagnosis, Risks And Nutrition

Diabetes Meal Plans For Those Suffering From The Disease

Preterm Labor Can Increase Chances of Heart Disease in Women

A Change in Coronavirus Genome is Making It More Infectious

Sexual, Physical Abuse on the Rise During COVID-19 Lockdown

Aging of Blood Arteries May be Linked to Gut Bacteria, Diet

Racism Can Increase Risk of High Blood Pressure in Blacks