10 Things You Need To Know About Pink Drug

If you read newspaper daily or surf through social media, you must have heard about the new drug making waves across the country. They are calling it pink drug, with some calling it ‘pinky’.

Sounds cute, doesn’t it? But don’t let the cutesy name dupe you. This drug is a killer and has so far claimed over 80 lives in the last nine months.

Despite having a charming and ostensibly innocuous name, the drug is a perfect death trap. But what is pink drug anyway and what makes it so dangerous?

Here are 10 things you need to know about the drug, called UC-47700 by the chemists.

1. Pink Drug Is An Opioid, Just Like Morphine and Heroin, And It’s Addictive

Pink, or UC-4, is an opioid derivative. Opioids are a class of drugs that are obtained naturally from the seeds of poppy plants. They are powerful analgesics and used when the pain is terrible and uncontrolled by common drugs such as NSAIDs.

When we say extreme pain, we are talking about excruciating pain, one that occurs in cancer patient. Morphine, the most popular opioid, is a gold standard in breakthrough cancer pain, as a letter by Vincete Ruiz-Garcia, of Home Hospitalization Unit, Spain, published in BMJ affirms.

Pink is a fentanyl-derivative. Like other opioids, it acts on opioid receptors – mu (µ), kappa (ĸ) and delta () – that are found in the brain, spinal cord and gastrointestinal tract. Morphine and fentanyl bind strongly to µ-receptors and help modulate pain perception. They bring profound analgesia and tremendous hedonic effect. They are also used to induce anesthesia in patients undergoing surgery.

Opioids are narcotics, which means they have an addiction potential. The euphoria they produce is so intense it makes junkies crave incessantly for the high. Heroin, which is a morphine-derivative, has no medicinal value and is purely used for recreational purpose. However, a few randomized controlled trials were conducted – one by Dr Brink, professor and senior researcher at CCBH, Netherlands, in 2003 — to determine the efficacy of medical heroin in treatment-resistant heroin addicts and found it effective.

When taken in high dose, opioids can lead to fatal respiratory depression and cardiac arrest. Death isn’t the only horrific effect of opioid intoxication although it pretty much means “The End” of your life, people report rectal bleeding and severe nerve damage with the use of pink. Here, this fellow tells you how pink has made his life hell.

Stats from US Centers for Disease Control and Prevention (CDC) say that death rate from opioid overdose has increased fourfold in the last 15 years — from 8,050 to 28,647.

2. U47700 Pink Drug Is 8x More Potent Than Heroin – No Wonder Junkies Are Curious About It

If you inject morphine, the pain relief you will get will be unparalleled to anything else in the world. Not only the pain – no matter how excruciating – will ebb away, you will also feel tremendously relaxed and happy.

Now multiply the pleasure that you got from heroin with eight – yes – that’s what pink drug gives you: makes you sit up on cloud nine. It is eight times more potent than heroin. Surprised, aren’t you?

When bound with the receptors, pink triggers the same biological brain process that provides tremendous rewards with everyday ordinary activities such as eating or having sex.

Pretty much explains why the drug is such a huge attraction for party dudes and junkies.

Now this is absurd but I am sure it has occurred to you as well – why is U-47700 called pink drug? It’s an attractive name but kinda weird, isn’t it?

The reason is simple – pink is the street name of a somewhat complicatedly named drug — U-47700. And since it’s a narcotic and psychedelic, it was bound to have a layman term tagged to it – just as other party drugs do: methylenedioxymethamphetamine (MDMA) has its own: Molly or ecstasy; amphetamine has its own: speed and crystal meth; and Ketamine: Green or K.

However, drug users claim that the award-winning name – pink – was coined by the law enforcement and not them.

Pink has a slightly pinkish hue which gives it the characteristic name. It comes in baby pink or white powder, liquid form or even nasal inhalers. The drug can be snorted, injected or taken orally. It is often taken in combination with fentanyl.

4. Pink Drug Is Not A Prescription Medicine – A Cocktail Of Pink And Fentanyl Is Sold In Streets

This super strong synthetic opioid is a street drug – a far cry from being an approved prescription drug. However, as we speak, it is considered technically legal in about 46 states in the US

The drug was patented in 1976. While conducting animal studies, chemist Jacob Szmuszkovicz noted the drug was far more potent and less addictive than morphine. The drug was originally intended to treat excruciating pain associated with cancer or surgery. The drug has never been tested in humans.

A July 2016 toxicology report of Annals of Emergency Medicine has cited a case highlighting that the cocktail of pink and fentanyl is sold on street masqueraded as a prescription drug – Norco.

There is bad news for junkies though as pink’s drug status is poised to change ever since the connection between the drug and deaths surfaced. So far, the drug has killed over 80 people in the country. The count is expected to rise. 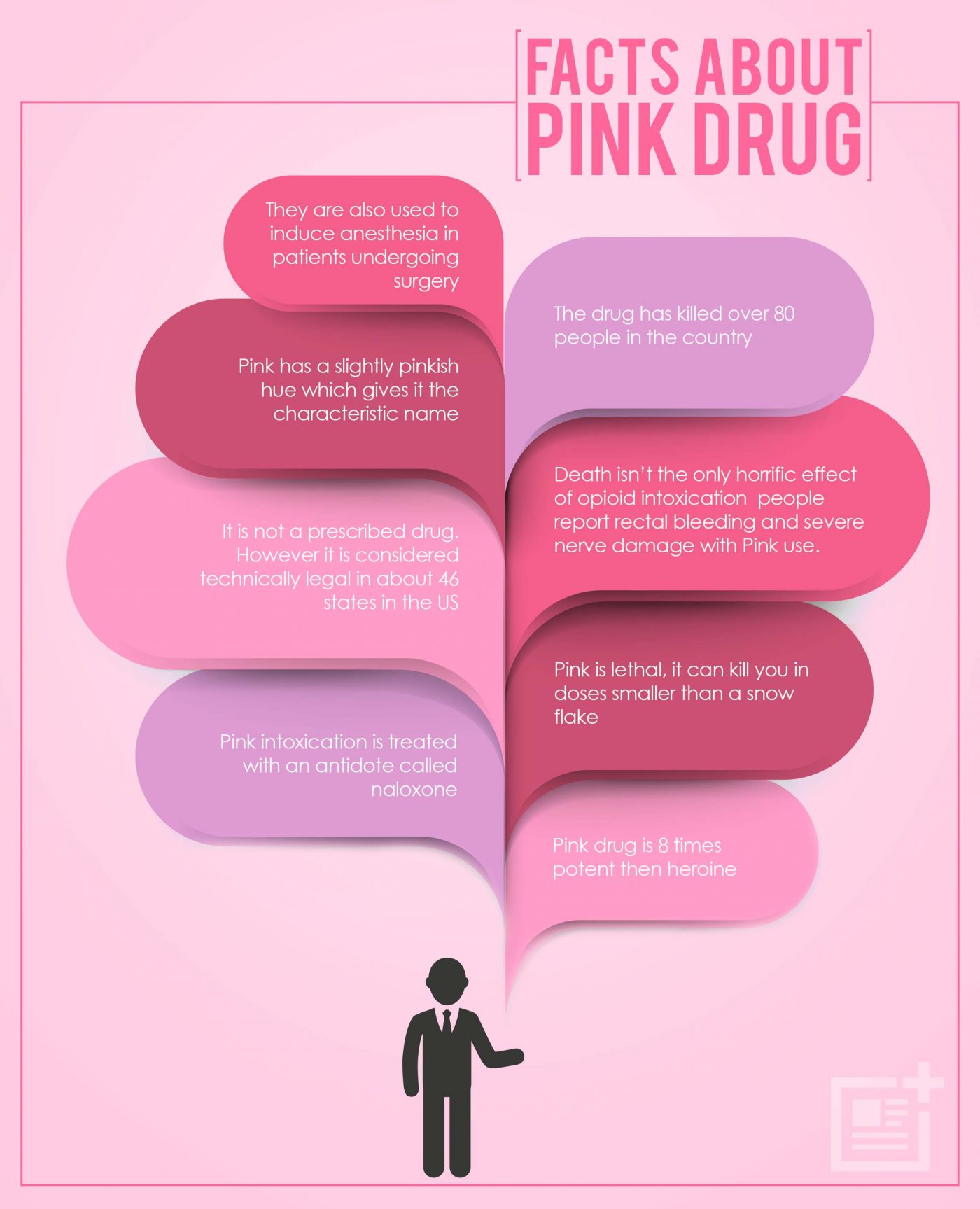 5. Pink Drug u47700 Is Legal In 46 States — You Can Even Obtain It Easily By Placing An Online Order

Despite being in the street market for over four decades, pink drug has recently dominated headlines for all the bad reasons. The drug is a killer.

In September this year, the drug overdose led to deaths of two eighth-graders in Park City, Utah. Ryan Answorth was found dead in his house just after 48 hours of his best friend Grant Seaver’s death.

“The substance is extremely toxic,” according to Captain Phil Kirk, Park City Police Department, “even in small doses.”

What’s more shocking is that drug is easily available online. In a press release on Park City website, the Utah Statewide Information and Analysis Center says, “The synthetic opioid… is growing in popularity with recreational drug users throughout the United States…[and] is readily available for purchase on the internet, primarily from Chinese suppliers.” Because this drug is so new, it is not yet illegal to purchase.”

Easy availability and accessibility is indeed a major reason for both mounting popularity and death rate. Earlier this year, the Drug Enforcement Administration (DEA) reported well over 30 cases of drug overdose and death in the country.

The drugs are available on following sites:

Pink is illegal in Sweden and France. Over a dozen states in the US, including Ohio, Florida, Oregon and Georgia have rushed to ban the drug. The DEA has announced that pink has temporarily been added to Schedule I status.

Schedule I drugs have no medicinal value and are used purely for recreational purposes. They have a high addiction potential and include drugs like MDMA and heroin.

Pink drug will be evaluated and investigated for three years. If proven lethal and psychedelic, it will reside permanently in the list; otherwise, it will deescalate to non-Schedule I status.

Pink can kill you in doses smaller than a snowflake. The drug is so potent that even a mere touch with the skin – let alone snorting or injecting — can prompt cardiac arrest, according to Park City Police Chief Wade Carpenter.

To curb the threat, the Park City Police have advised parents to talk to their children about the extreme danger involved with the drug. In fact, parents should even go ahead and search their children’s belongings. They should even request a locker search at school. Call law enforcement immediately if you suspect your child is in possession of U-4, the police say.

7. Pink Drug Killed Prince And It Can Kill You

Do you know pink overdose was the reason why popular singer Prince died?

Yes, in a September 14th press release from NMS Labs, Chief of Forensic Toxicology Barry Logan said that both U-4 and Fentanyl were found in the cocktail that killed Prince.

Such a cocktail combination is a blindspot for many labs since they are novel and labs do not routinely investigate them. But labs, says the press release, are beginning to catch up.

8. Pink Drug Intoxication Is Treated With An Antidote Called Naloxone

As soon as the patient is diagnosed with an opioid intoxication through vital signs, physical examination, and blood and urine analyses, antidote is given. Naloxone, which is given through IV in a small dose (0.04mg) in the beginning and gradually increased up to maximum safe dose (15mg), reverses all signs of opioid intoxication in about 20-90 minutes.

9. FDA Says You Should Not Combine Opioid Drugs With Cough Medicines Or Sedatives – They Can Kill You!

The US Food and Drug Administration (FDA) is totally cognizant of the fact that analgesics and sedatives are the top misused drugs in the world. From time to time, it issues safety warnings.

The warning about opioid combination is serious. The FDA has strongly warned against combining opioids with cough medicines or benzodiazepines. The combination, the FDA says, is lethal and gives life-threatening shallowed breathing.

10. Manufacturers Can Still Bypass The Ban By Tweaking The Drug

Although the DEA has currently taken steps to slap a ban on pink drug, 10 bucks says the chemists will come up with a hideous solution. Who knows they may tweak the chemical structure of the drug a bit to bypass the ban.

Since Pink is made in China, it is, of course, cheap. And underground labs in China are churning out the drug nonstop and shipping it around the world (man, do they mean business or what?). Variations in the drug are likely – and will unfortunately be – deadly.

A pharmacy graduate, Saira Zulfiqar works as a medical writer and researcher. She is taken to books, chai, and loneliness. She is also a wilderness and wildlife enthusiast who wants to get lost in the middle of nowhere.

Do You Know What Is The Most Common Type Of Plastic Surgery In The US?

This Is What Eating Human Brain Can Do To You

Metformin Uses, Dosage And Side Effects

Cocaine And Unsafe Sex: A Match Made In Hell

The A-Z Of Cocaine

Teenagers Have Double the Risk of Getting Infected with…

Drinking Even A Small Amount in Pregnancy Can Affect Child’s…

First Evidence of Air Pollution Particles and Metal Found in…

3D Printed Nasal Swabs as Effective as Commercial Swabs for…