What Is Organic Food?

What is organic food? Or if you are wondering ‘what does organic mean?’, then let me tell you that in the food world, the term ‘Organic Foods’, refers specifically to food grown in an all-natural way. Organic food goes beyond a healthy food eating lifestyle and focuses on ensuring food safety, nutrition, and reliability of the diet. The advent of organic foods has raised some eyebrows – what is the impact of synthetic food development on human health?

Organic foods differ from conventionally grown foods in a number of ways. Foods can only be labelled ‘organic’ if they meet certain criteria set for their cultivation. Specialized farming processes utilised for growing and processing organic foods are broadly categorized as organic farming.

Organic farming essentially ensures that the product is grown in a safe environment. The crops are cultivated in a safe soil, free from synthetic modifications which include conventional farming methods and products.

In the same way, organic farmers dealing with livestock are not allowed to use antibiotics, growth hormones, or any type of animal-by-products based feed. Instead it is compulsory to make sure the livestock is provided with organic feed and allowed access to the outdoors for healthy natural growth. 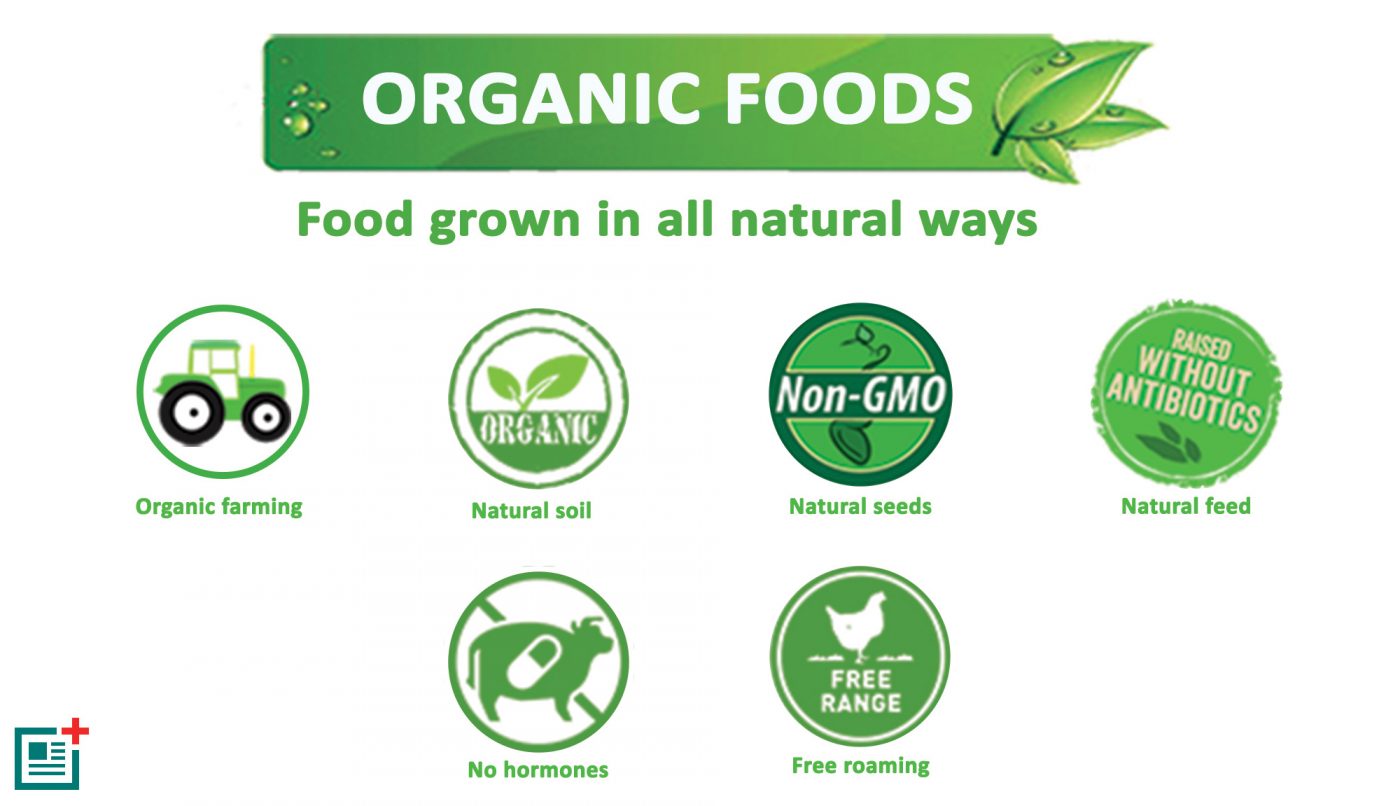 Studies have shown that organic foods offer a variety of different health and other benefits when compared to conventionally produced foods, since they are free from harmful synthetic compounds.

It is suggested that the organic produce has a higher quantity of nutrients and is free from harmful synthetic compounds. Organically produced fruits and organic vegetables are believed to be richer in antioxidants which leave a positive effect on the health. In the same way, they are free from chemical and synthetic allergens found in conventional foods.

Consuming only organic produce is shown to lessen or remove symptoms of food allergies in affected people. Recently a research found organic meat and milk to be 50% richer in omega-3 fatty acids when compared to the same conventional products.

The quantity of chemical toxins was found to be extremely low in organic foods when compared to the ones conventionally produced. Chemicals found in pesticides, fungicides, herbicides and insecticides are found more commonly, in higher levels, in foods developed through conventional agriculture. Long-term consumption of such chemicals even in minute quantities has been linked to adverse health effects.

The freshness of organic food is considered to be greater owing to the absence of traditional preservatives. As a result organic food e.g. fruits, vegetables, dairy and so on, are believed to have a fresher and more appetizing taste. 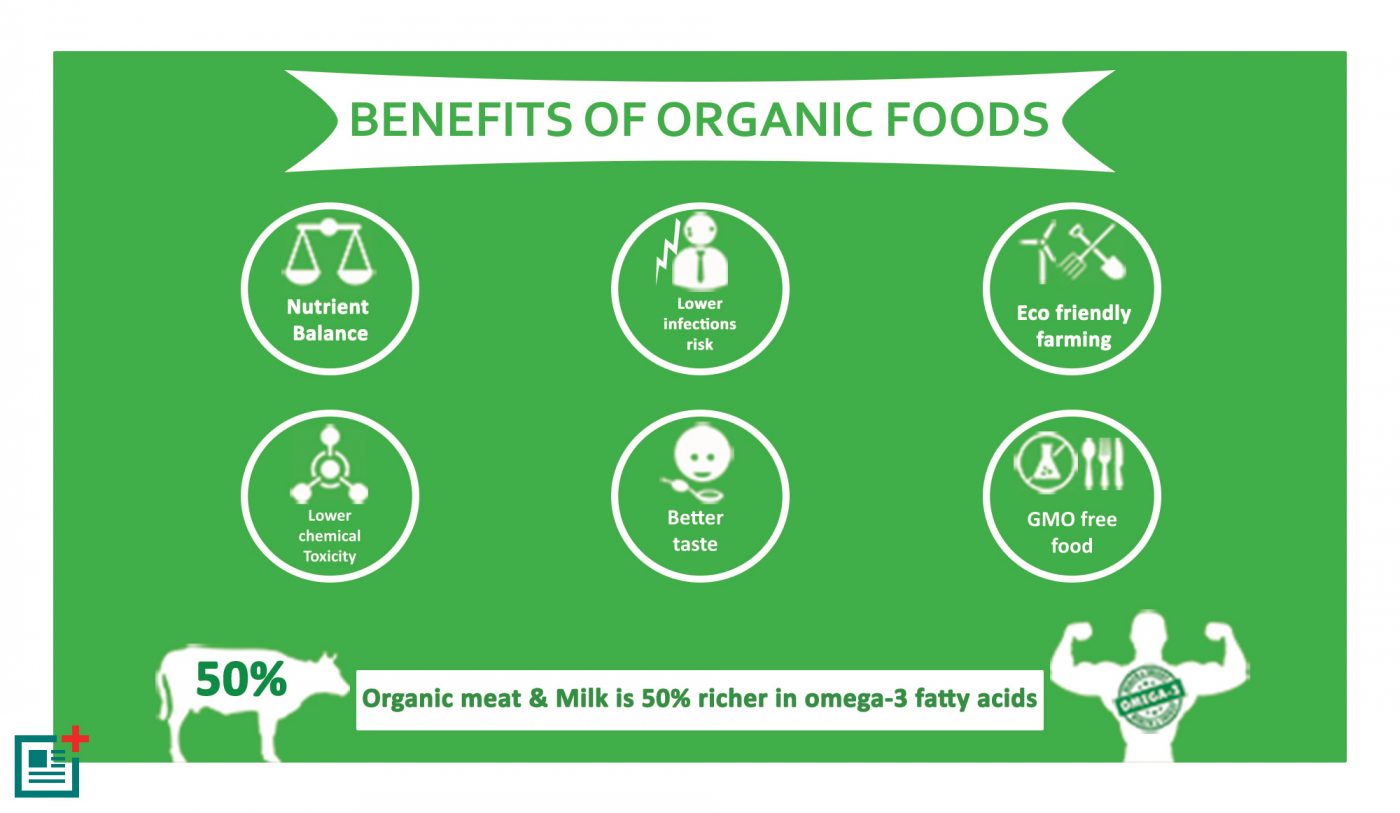 In addition to health benefits, organic farming is also environmentally friendly. Organic farming leads to a reduction in air, water and soil pollution that leads to an increase in soil fertility and water conservation. The absence of chemical fertilizers also eliminates the chances of developing health risks for the farmers and surrounding residents.

Organic livestock which is brought up on organic farms and its dairy products are less prone to cause bacterial infections in consumers. Organic animals are not given antibiotics, growth hormones or feed created from animal by-products, which lead to resistant strains of bacteria. When consumers eat conventional meat, they also consume the resistant bacterial strains leading to higher risks of infections e.g. E.coli infections, Mad-Cow disease and so on.

Organic food is GMO-free, for it contains non-GMO ingredients.. GMO foods consist of plants or animals with their DNA altered in a way which is not possible naturally. Organic crops are cultivated without the help of GMO seeds and organic animals are not fed on GMO feeds, as seen in conventional food production.

Have you ever stood in front of the organic food isle in your super market and wondered which brand of organic food is the right choice for you? Are you really aware of what the most commonly used labels such as ‘organic’, ‘natural’, ‘free-range’ and ‘non-GMO’ actually mean? Organic food consumption is a choice. Like all food choices even they have variations.

The secret to organic shopping lies in understanding the labels placed on different types of organic products. Once organic labelling system is clear, a consumer can easily choose from a wide range of organic products, based on their personal preference.

Let us guide you through all the labels of organic shopping and what they actually entail. Organic certification can only be achieved when set production standards are maintained during the production process of the food. Organic standards vary in different countries. 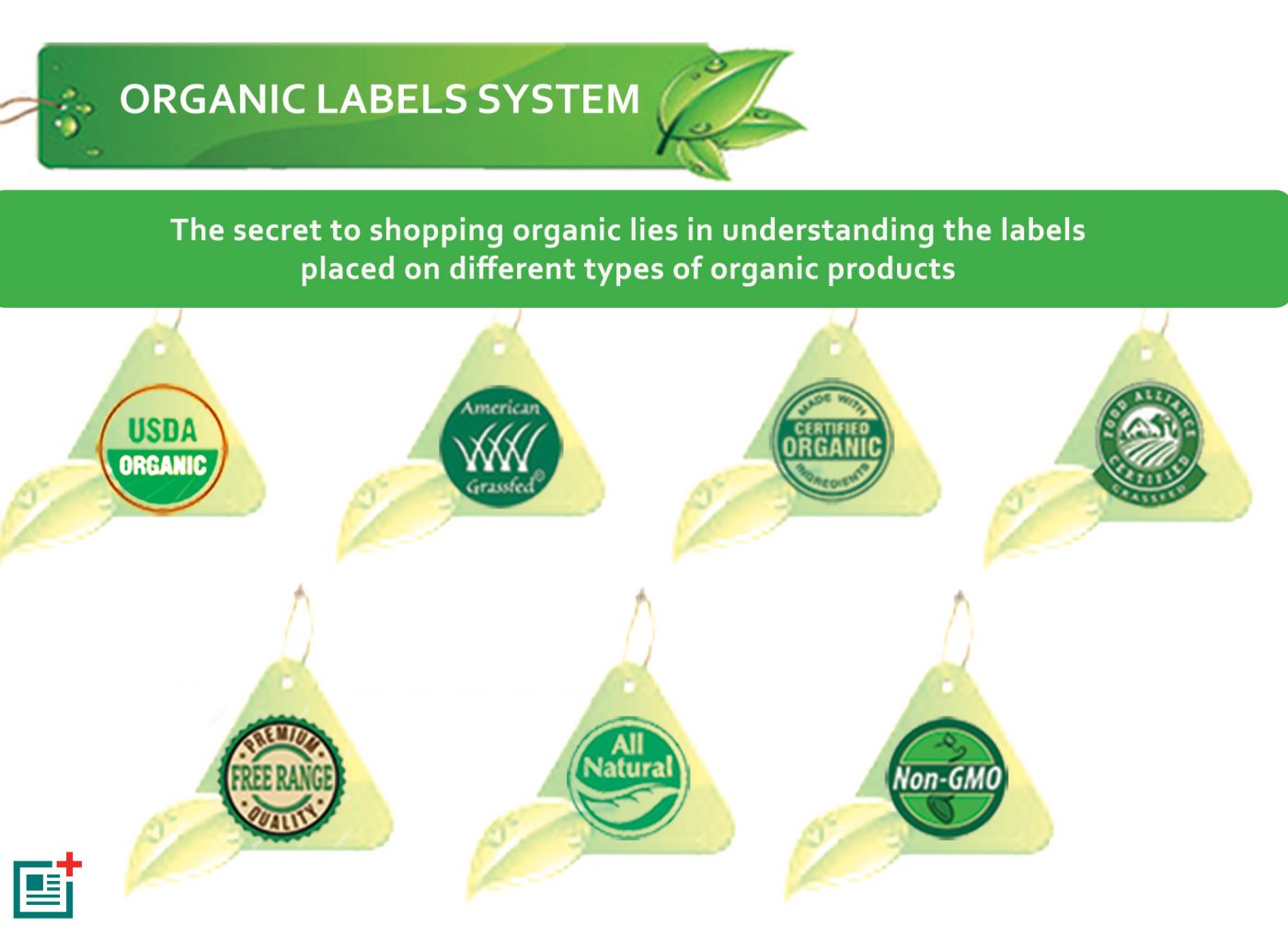 In the US, the label ‘USDA Organic’ is the highest and most reliable organic certification. The ‘USDA Organic’ certifies that food is both 100% to 95% organic and also completely GMO free. The certification process is directly maintained by the U.S. government and referred as the best choice while shopping for organic food.

‘Made with Organic Ingredients’ Label:

Bear in mind that not all organic producers are certified and some do not even go through or want to go through the USDA certification process, such as the small farmers at farmer’s markets. So while shopping at such places, it is recommended to ask the farmers about their production process and products in detail. 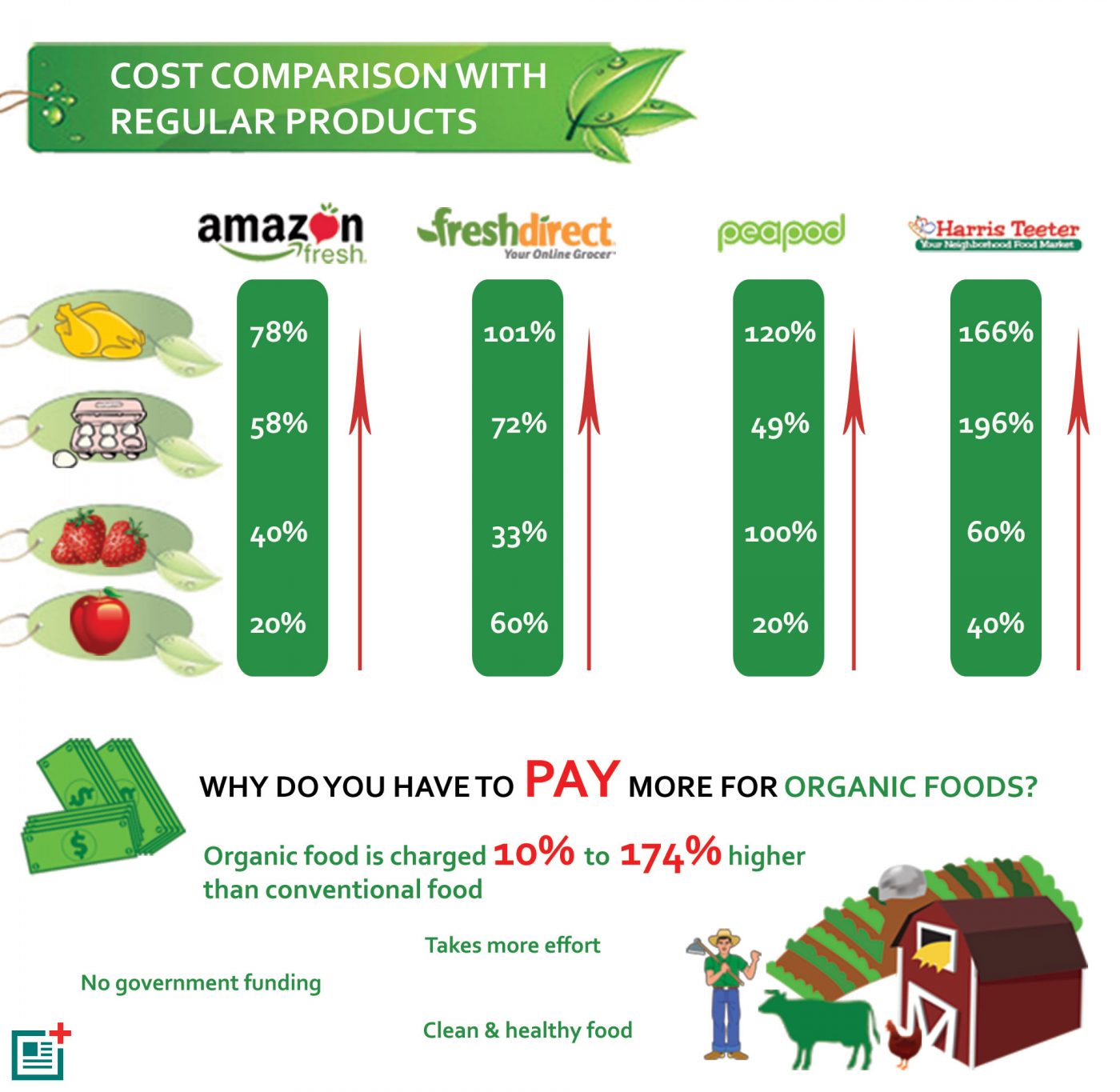 Packaged food with the label ‘Natural’ is a term used loosely by any food manufacturer and does not mean that the food was cultivated using any set standards. Natural food is different from organic and does not come under the organic certification. Natural mainly means ‘minimally processed’. For example in meat, natural meat cannot contain artificial colors, flavors or any preservatives. However the livestock is still given antibiotics and growth enhancers during their growth and feeding making the label pointless. Some meat or dairy products even show the ‘Naturally Raised’ label but so far, it does not hold any merit.

The ‘Grass-Fed’ label claims the animals were only exposed to a diet of grass or hay and are properly grazed. Naturally livestock tend to eat grass in the wild and are known to be healthier and leaner on such a diet. Studies have shown that cows which are fed with grass have healthier omega-3 fatty acids. However, some labels only say grass-fed but do not state organic grass, so it is possible the cattle was exposed to grass grown with chemical fertilizers.

The term ‘Free-range’ or ‘Free-roaming’ generally means the livestock were not confined and were raised in the outdoors naturally. However, it does not specify the amount of time the animal spent outdoors and if their feed was natural or synthetic.

The Non-GMO Project Verified seal indicates foods developed through conventional methods but which have no more than 0.9% of GMOs or genetically engineered ingredients. Such foods are basically considered GMO-free in the U.S. and even in Canada, but are not to be confused with organic foods. Seals which just specify ‘Non-GMO’ or ‘GMO free’ are not necessarily verified by the government and can be placed loosely.

Some labels further classify how meat or dairy products were produced. The labels are known and recognised by the U.S. Humane Society and are:

Where To Shop ‘Organic’?

Other than grocery stores, fresh organic produce can also be bought from various organic stores or organic markets such as:

In the U.S., many small towns and even some cities now host weekly or monthly farmers’ markets. At such events the small organic farmers personally bring their produce to the market and sell it fresh from the farm. The price of the produce is not set and can sometime cost less or maybe even more than the grocery store isle products. To find the nearest farmers market, you can visit the Eat Well Guide, Local Harvest, or Agrilicious sites, which tell you the exact coordinates of the nearest famers market according to states and city.

A Food Co-Op or a cooperative grocery or organic food store where all the produce is basically of organic origin. People can even join the Food Co-Op , since it offers low prices to all members, all year round, after an annual fee payment for membership. Such stores also provide organic food delivery at home.

People can even join a Community Supported Agriculture (CSA) farm, in which they can buy organic produce in bulk directly from a local organic farm of their choice.

Why Do You Have To Pay More For Organic Foods?

Although organic food seems to be the best choice in terms of health, some criticism  surrounds its price. Organic foods are generally cost more than conventional foods by 10% to 174%. Farmers reason that growing organic food requires a significant amount of time and effort thus their asking price is appropriate.
The price difference is not very high for fruits and vegetables but can be substantial when buying organic meat and dairy.  Others claim that organic foods are not really helpful and if a person merely shifts to a healthier diet from conventional foods, then the same results can be achieved. In the end it all comes down to personal choices; whether a person wants the risk of being exposed to synthetic chemicals through food or go organic.

Rise of the Organic Industry:

According to the Organic Trade Association (OTA) in 2014, the organic foods industry sales generated $39.1 billion in the U.S., with a record breaking 11.3% rise compared to the previous year. The organic food industry now holds 5% of the total U.S. food market place and is expected to increase.

The numbers show the gradual shift in eating habits across America. More Americans are now becoming health conscious and moving away from processed food choices. Today consumers spend a majority of their time in the fresh produce isles debating their choices. Since 2009, sales of fresh produce have risen by 30% especially among children and young adults.

Moreover, the millennial generation especially was found to be untrustworthy of large food corporations and their packaged products.  The number of consumers who view packaged goods without nutrients and as sugar loaders is increasing. This outlook is one of the driving forces behind the rise of the organic food industry, one which will continue to grow in the years to come.

Shahzadi Seher Sohail is a professional nutritionist with a zeal for writing and loves to explore innovations in the health care sector by reviewing cutting-edge research and latest public policies about well-being. After graduating in biotechnology she decided to focus on the root causes of chronic diseases. In addition to being a devoted TEDx enthusiast, Seher is also an avid book reader and traveler.

How Much Water Should I Drink A Day?

This Is How Poverty Declines Your Brain Function

US To Resume Relations with WHO: Fauci

Inequitable Distribution of Covid-19 Vaccines in Low and Low…

New Trial Finds Arthritis Drug Is Not Effective For Severe…

Free App Predicts Risk of Covid-19 Transmission Based on…

UK COVID Variant Detected In 60 Countries According To WHO