Neuroscientists from University of Florida have recently tracked progressive loss of neural cells in Parkinson’s disease (PD) and two similar neurodegenerative diseases. The nerve damage has been previously found by experts, but this study is significant in its findings as now the researchers will be able to observe the changes in the neural cells and their function as the disease progresses over time. The discovery will help diagnose the disease early and develop drugs to arrest its progress.

Funded by the Parkinson’s Disease Biomarkers Program by the National Institutes of Health, this is a pioneering study which indicates highly specific markers for PD whose deterioration indicates worsening of the disease.

In the study, a significant decline in the functional activity in the putamen and primary motor cortex (M1) was observed in PD patients as compared to control group. In patients with another resembling neurodegenerative disease called multiple systems atrophy (MSA), the changes were in extrastriatal regions and a reduction in M1, SMA and superior cerebellum was highlighted. On the contrary, in PSP, all the regions under observation showed reduced activity. Interestingly, in control group, no changes in the activities of the above mentioned regions were found.

Previous PET and MRI scans have not been sensitive to diagnose the disease at an early onset but now it has become a possibility, whose details were also recently published by Neurology (the official journal of the American Academy of Neurology).

Now that experts are able to pinpoint the changes in the brain anatomy, targeted therapeutics for Parkinson’s disease are likely to help over one million patients in the US alone.

Debra Babcock, MD, PhD, Program Director at the NIH’s National Institute of Neurological Disorders and Stroke (NINDS), enthusiastically said, “This study is an example of how brain imaging biomarkers can be used to monitor the progression of Parkinson’s disease and other neurological disorders.”

The experts looked at the longitudinal changes in the brain activity of patients with Parkinson’s disease (PD), multiple system atrophy (MSA) and progressive supranuclear palsy (PSP) by using task based functional MRI (fMRI). 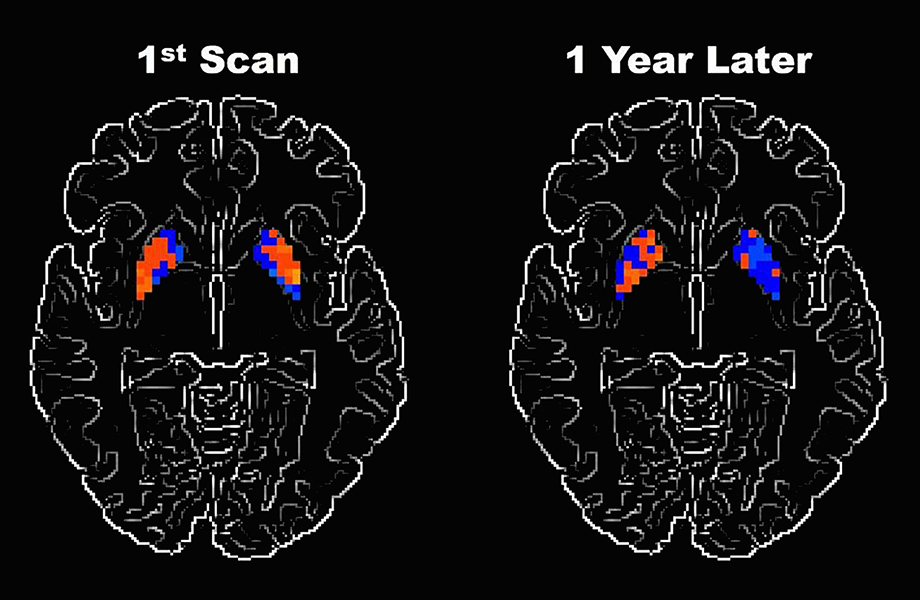 Parkinson’s disease is common in elderly people and is classified as a neurological disorder leading to resting tremors, loss of automatic motor function, hampered muscular coordination and body balance. However, the symptoms are often identical to another set of neurological diseases which are collectively known as “Atypical Parkinsonism”.

The symptoms of PD are marked with loss of nerve cells in the substantia nigra which controls the motor functions. Upon depletion of the nerve cells in this region, the signals which synapse to cells in the striatum are weakened. Striatum is another region of the brain which is responsible for maintaining bodily balance and help in mobility. As the neural cells in the substantia nigra begin to die, the neurotransmitter dopamine levels are also reduced which further contribute in neurocognitive impairment in the patients of PD. However, primarily the reduced dopamine levels cause the neurons of the striatum to fire uncontrollably, causing hindrance for the patient to direct voluntary motor function.

On the contrary, the underlying causes for MSA and progressive supranuclear palsy (PSP) are different, but due to the resemblance in the elicited symptoms, they are often confused with PD.

In MSA, in addition to the symptoms of PD, the patients have unstable blood pressure which falls upon standing, bladder and bowel dysfunction, sexual disturbance, discoloration of skin, body tilt and sleep disturbance.

On the other hand, in PSP the additional symptoms include early postural instability and inability to look up and down.

Therefore, the researchers of this study felt a need to include the patient of MSA and PSP in their study, to draw a distinction in the loss of brain function in PD and the corresponding brain chains in these conditions.

The modification of signal intensity was measured in specific regions of the brain, the putamen and activity in primary motor cortex (M1), supplementary motor area (SMA) and superior motor regions of the cerebellum, all of which were linked with the motor coordination and limb movement.

Thereby, the findings of this research showed unique patterns in loss of neural cell functions in PD and associated diseases. This, in turn, will help clinicians to not only have an accurate diagnosis which is made timely, but it will also help neuroscientists to find targeted drug therapy and treatment to reverse the neural damages, caused in these conditions.

In the similar context, senior author David Vaillancourt, PhD, a professor at the University of Florida’s Department of Applied Physiology and Kinesiology, said, “If you know that in Parkinson’s disease the activity in a specific brain region is decreasing over the course of a year, it opens the door to evaluating a therapeutic to see if it can slow that reduction.”

He went on to say that this technique will act as a marker at evaluating physiological changes in the neural cells as the disease continues to progress.

According to an estimate, about 60,000 Americans fall prey to Parkinson’s disease every year and globally more than 10 million people give in their independence to this debilitating disease which eats away their health like termite.

Popularly known to us as the Olympian “Muhammad Ali’s” disease, Parkinson’s disease has left many neurology experts perplexed for years. While the experts suggest that the disease is caused by underlying genetic susceptibility and an environmental trigger, a lot is yet to be explored in terms of reversing the symptoms of the disease.

Over the years, the medications have been working to reduce the symptoms of the ailment. With the emergence of this study and identification of intricate changes in specific regions of the brain, we might soon see a drug that targets the damaged neural cells to replenish them.

Javeria Din, MD, an American Medical Association member, is based out of New York. She is currently doing her residency training at Bergen New Bridge Medical Center. Before that, she has worked at Manhattan Psychiatric Research Institute from August 2017 to Feb 2018. She loves to start her day with a good cup of coffee and a research news.

COVID-19 Can Cause Long-Term Respiratory Problems

Penis Microbes May Cause Bacterial Vaginosis in Women

Metformin Plays Important Role for Women with PCOS During in…