For the past few decades, a reduction in death rate has been seen in the US population living with one of the most common types of lung cancer, known as non-small cell lung cancer. The reduction in mortality rate may be due to the newly devised treatment approaches, says a recent study conducted by a team of researchers at the National Cancer Institute (NCI), part of the National Institutes of Health (NIH). The findings of the study have been published at the New England Journal of Medicine (NEJM).

A first-ever @theNCI-led study on #NSCLC #LungCancer published today in @NEJM shows that nationwide mortality rates for NSCLC, the most common lung cancer, have fallen sharply due primarily to recent treatment advances. https://t.co/7g2NTytgVW

Many people do not know that cancer is not a single disease. It is an umbrella term for diseases characterized by the abnormal and uncontrolled growth of cells. There are more than 200 types of cancers, each classified based on the cell that is initially affected.

The researchers focused on one of the most common types of lung cancer known as non-small cell lung cancer (NSCLC) which is characterized by uncontrolled cell growth in tissues of one or both lungs. Around 80% to 85% of the population has been suffering from NSCLC, according to an estimation published by the American Cancer Society (ACS). Whereas, the condition accounts for 76% of the cases in the United States (US) alone.

Infographic: non-small cell lung cancer represents up to 85% of all #lungcancer #LCAM14 pic.twitter.com/vlAJ2xTPAK 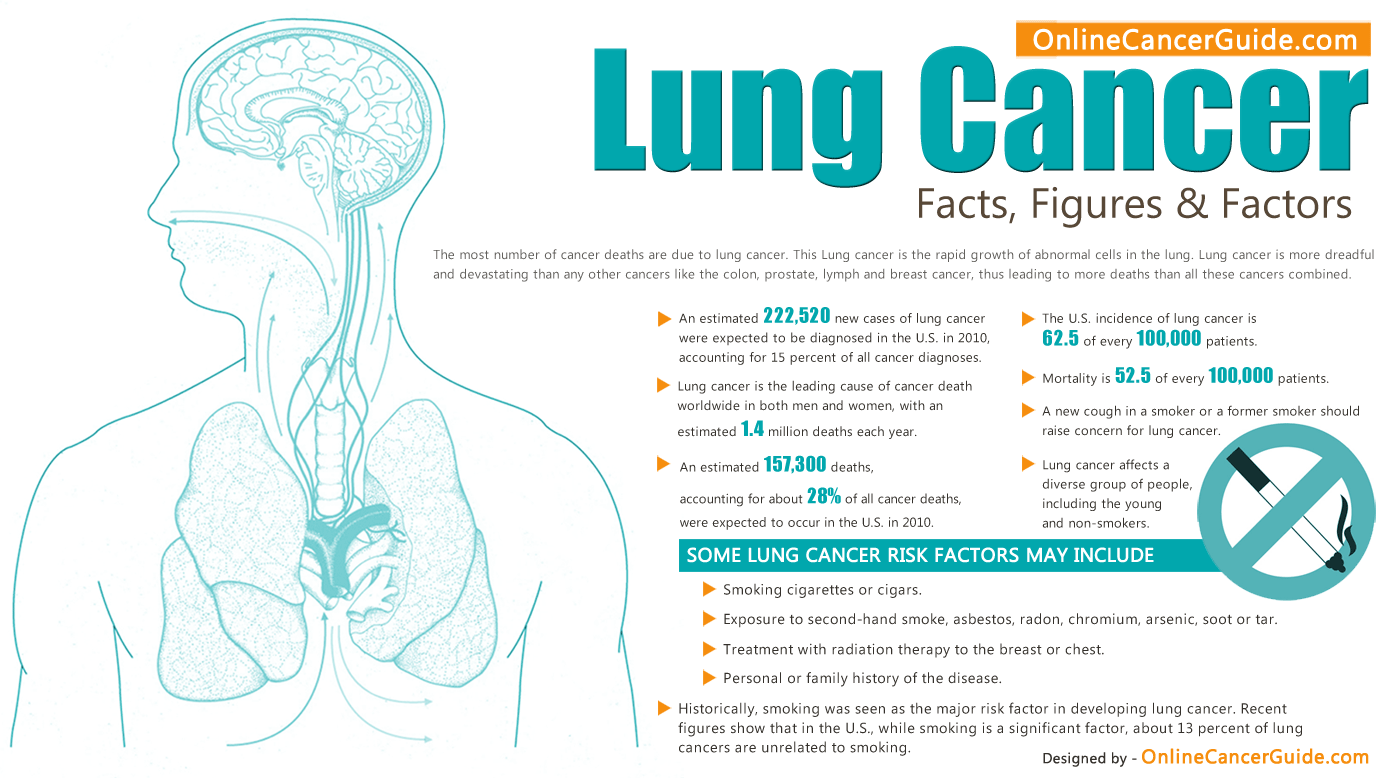 Source: Online Cancer GuuideFor the current study, the researchers collected the data from different resources including NCI’s Surveillance, Epidemiology, and End Results (SEER) cancer registry program. The team gained all the diagnoses of cancers, every type of cancer, and the rate of deaths due to cancers from SEER.

Later on, they did a comparison between NSCLC with small-cell lung cancer (SCLC), a tumor that grows and spreads faster than NSCLC. It accounts for 10% to 15% for all lung cancer diagnosis.

Before and After Analysis of Mortality Rate Among NSCLC cases

The team also did a two-year survival analysis that determined a significant difference among the rate of diagnosis among people suffering from NSCLC. It has been found that 26% and 35% of the man are diagnosed with NSCLC in 2001 and 2014, respectively. The two-year survival rate was the same for the women as well.

Besides the diagnosed cases, the investigators also found out the incident rate as well as the rate of decline in the cases of deaths among both men ad women with NSCLC. The findings from the present study suggested an annual decline in mortalities and the number of incidents was 4.3% and 3.6%, respectively.

Contributing Factors that May Reduce Risk of NSCLC

The deputy director and the co-author of the study said: “Reduced tobacco consumption in the U.S. has been associated with a progressive decrease in lung cancer deaths that started around 1990 in men and around 2000 in women. Until now, however, we have not known whether newer treatments might contribute to some of the recent improvement”.

The decline in mortality rate was noted by the researchers in 2013 when the genetic testing was started. The changes in genes caused by NSCLC were targeted by newly developed treatment approaches.

Previously, in 2012, all of the patients with NSCLC underwent genetic testing that was recommended by the National Comprehensive Cancer Network (NCCN). The genetic testing resulted in an increased mutation in Epidermal Growth Factor Receptor (EGFR) as well as in gene rearrangement by Anaplastic Lymphoma Kinase (ALK) that was targeted by the new treatment.

However, the findings of the current study suggested that the immune checkpoint inhibitors were significantly associated with the reduction in mortality rate among people living with NSCLC.

The lead researcher of the study Nadia Howlader, Ph.D., of NCI’s Division of Cancer Control and Population Sciences said:

Still, there is a need for a more evidenced-based study to find out the effects of EGFR or ALK inhibitors or other advances in therapy.

Similar Coronaviruses to SARS-CoV-2 Discovered in Cambodia and Japan

Scientists See a Decrease in the HIV Related Deaths

US Hospitals Are Critically Short on Staff to Handle…

WHO Has Bold Plans to Eradicate Cervical Cancer in Next 10…