President Obama Knows How To Parent His Daughters Well

Changing their diapers, wiping off their poop and feeding them food while they show you tantrum, kids are cute but they can sometimes turn into little monsters.

While growing up makes them independent in many ways, they always look up to their parents for guidance and emotional strength.

It is not just about providing financially for their education and good quality lifestyle, it is also about letting your child know that they have your back.

Being a good father is certainly not easy, but when you have to be the president of United States of American and a good father, parenthood turns challenging by manifolds.

But, what is it that Barrack Obama couldn’t do? Making history for being the first black president walking up to the White House isn’t something one can go around casually doing, we know. We saw him doing do so nicely.

We are totally amazed at the leadership of President Obama, but more than that, we admire being a great father.

With the global-level responsibilities resting on his shoulders, he managed to read Harry Potter books to his daughter. How adorable is that, guys?

We guess, being nice to kids is just Obama’s thing! 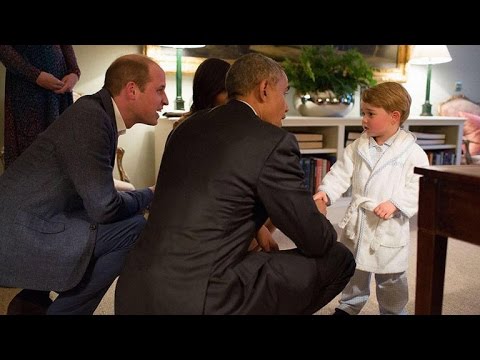 Obama worked hard to pave his way to the U.S. Senate before he ran for the presidential election in 2004. During this time when he couldn’t spend time with his daughters, his eyes would well up with tears as he feared turning into a disappointment for them. Born to a white American woman and black Kenyan man, Obama had a childhood without his father in it. The vacuum left behind by his father urged Obama to be a good dad to his daughters so they can’t get to experience what he grew up with.

Today, as we see his second presidential tenure ending successfully, he is leaving behind the legacy of being a good father and a good president, simultaneously.  Not all the presidents who took office in the past have kept an optimal balance between their work and home, but Obama has definitely done it with class.

He takes pride in being a good father to his daughters, 18 year-old Malia and 15 year-old Sasha.

Being an exemplary dad to his kids, he is said to be an authoritative parent who loves his children but also have clear boundaries set for them which if crossed makes him upset. Yes, Malia Obama was found puffing a weed cigarette last month and the President was definitely not OK with his daughter smoking weed, according to reports.

Characterized by reasonable demands and high responsiveness, children of authoritative parents are generally self-confidence, have firm self-regulation skills and happier attitudes. As the parents practice this parent style, they are likely to encourage children to voice their opinions, allow them to work independently, listen to the children and express their affection to them while having a consistent discipline and fair administration over them.

As we talk of disciplining his daughters, the president and first lady, Michelle Obama have some rules jotted out.  In this technology-driven world, Mr. President ensured that his girls didn’t use mobile phones before the age of 12 years.

Similarly, until some years back, the girls were allowed to watch television only on weekends and their computer use was primarily bound to school projects.

Growing up as daughters of America’s president, the girls could have accustomed to countless perks and living like princesses doesn’t seem as a huge deal for them.  But to instill a sense of responsibility and good moral values in his daughters, the girls have developed a habit of carrying out their chores themselves.

Ensuring a good communication with your children is the key to being a successful parent and President Obama keeps up well with it.

According to Michelle Obama, as the clock ticks 6:30 every evening, we leave everything and have dinner together as a family. During this time, a healthy conversation between parents and children help become a good teaching moment which could yield better results than unsolicited lecturing.

The president is a classy daddy but it would be unfair to not talk of the amazing parenting skills Michele Obama has. When the president talks about how great her daughters are, she never misses a chance to say “Michelle has done a great job with them”.  Parenting is really a job done by both the parents and when one parent is busy, the other can fill in for their duties and this is another learning President’s parenting style leaves us with.

The president has a habit to say good things about his children and appreciating kids helps them strive for improving in what they do and who they are.

In this fast paced life, he has allowed the use of gadgetry to his daughters as they have grown up into responsible teenagers. He doesn’t go hard on them for their obsession with their phones and have a good laugh admiring how their tech proficiency is great while their father struggles understanding half of functions of the gadgets they use.

He encourages them to experience life and lead it the way they like. Knowing the social commitments of kids these days, he doesn’t keep them held up in the White House and give them the space they require. He is a great dad who lets his daughters enjoy their life, while keeping an eye on their activities for them to not deviate from their values and ultimate life goals.

Fizza Akbar is a graduate in biotechnology and psychology and aspires to make a career in human genetics and genomic medicine. She enjoys writing, travelling and exploring life in general. Fizza is a self-proclaimed sufferer of OCD and a chronic procrastinator.

How Much Energy Can You Produce By Burning Your Poop?

Do You Bite Your Nails? You May Be A Perfectionist