A Woman’s Right To Her Body

Have you ever wondered what rights do you have on your own body? How those rights can change during and after pregnancy? What rights your partner has during the period, over you or the fetus? When is the baby a baby or a fetus? These are some of the basic questions which come into a person’s mind after hearing the words, ‘woman’s rights to her body’, but believe it or not, the issue can get way complicated. For example, let’s talk about the elephant in the room first and consider the much debated, and most politically disputed aspect of this discussion: abortion.

Jessica Waters, Associate Dean at the School of Public Affairs in American University, gave us some context in a recent January 2016 TEDx talk, in the form of two cases.

She had recently met a woman who had suffered from a sexual assault in college during her 20s. Due to interference of the medication for depression she was on, with her birth control method, she found herself pregnant. She was not prepared to have a baby at the time and thought herself to be unfit for the job at that time. She had an abortion.

Another woman, new in a committed relationship, found herself pregnant. She and her partner were scared but excited. It was then that they found that their daughter, who was not born yet, had serious health complications which minimized her chances of survival and predicted lifelong health issues associated with the heart condition. The doctor among other options also presented the option of an abortion. The couple after consideration decided to keep the baby.

You can be a woman with a healthy sexual life or a couple who is trying to conceive a baby, the last thing that should be on your mind is the legal and ethical dilemmas of a pregnancy. We do not tend to give it a second thought till we really need to. But the scenarios like above send your mind into an overdrive and force you to consider issues you might not have even thought of.

Your rights directly depend on where you live or what citizen status or nationality you have. A woman in Europe, Asia, or America may have different rights than you.

According to the first international reproductive policy document, Cairo Program of Action, your rights include satisfying and a safe sex life, capability to reproduce and the freedom to decide and to choose how often, if, when and how to do so. You also have rights to a disease free reproductive system and functions within a complete state of mental, physical and social well-being, along with a right to decide the number and spacing of children, reproductive autonomy, consent and equality in marriage or a relationship, privacy, sex education, protection against gender based practices like female genital mutilations, and right to safeguards against sexual and physical violence.

Your rights also include access to safe, affordable, effective, and acceptable methods of family planning of your choice, the right to regulate your own fertility using methods within the law, the right to healthcare services that can enable you as a woman to go through pregnancy and childbirth with the best chance of having a healthy baby, along with the right of a safe abortion.

A Woman’s Right To Her Body: Some Historical And Legal Context

In United States, reproductive health rights follow the same lines of principle. However, US Constitution does not have any specific provisions regarding the rights of a person with respect to her or his body but such rights are often upheld through rights to privacy.

In retrospect, the road to sexual and reproductive freedom was not easy. 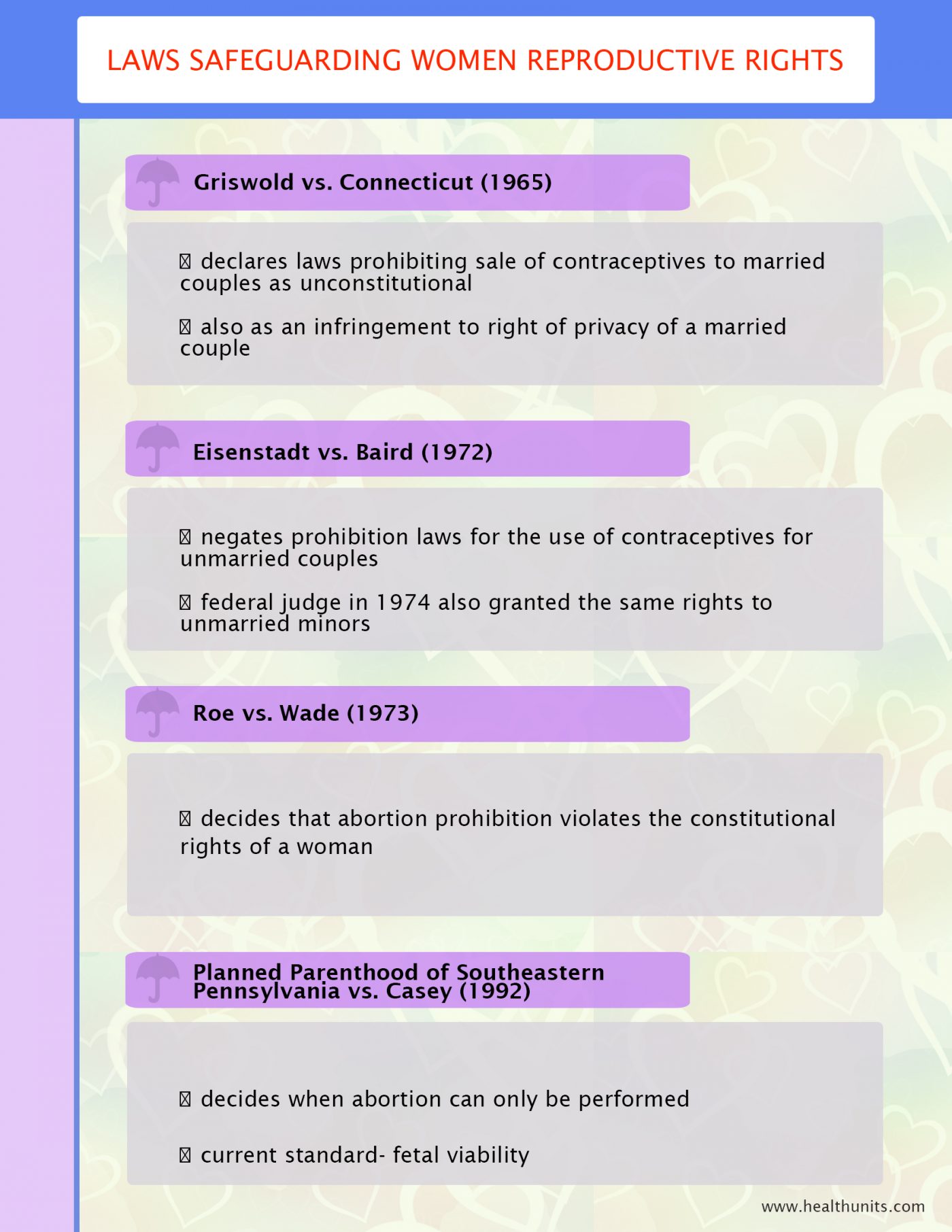 Only 50 years ago, women were not even allowed to use contraceptives to prevent pregnancy. Margaret Sanger became one of the first people to fight for the rights of contraceptives under women control in 1960s.

Griswold vs Connecticut (1965), a landmark decision, laid down laws prohibiting the sale of contraceptives to people (in some cases for married couples) as unconstitutional. The law declared that these former laws infringed on the right of privacy of the couple in a marriage.

Then came Eisenstadt vs Baird (1972) which negated prohibition laws for the use of contraceptives for unmarried couples. A federal judge in 1974 also granted the same rights to unmarried minors.

After the period of “sexual revolution”, the debate turned to abortion. Before Roe vs Wade (1973) abortion was illegal in multiple states. But a 7-2 majority of the Supreme Court decided that abortion prohibition violated the constitutional rights of a woman.

Since then the lines have been drawn and the ethical-abortion debate has become a political issue in United States.

Planned Parenthood of Southeastern Pennsylvania vs Casey (1992) decided that the abortion can only be performed before the onset of fetal viability (when fetus can survive outside of the womb).

“Hue Of Policies” And Your Rights

The complications in understanding and explaining these current body integrity rights start when rights of others like fetal, parental, spousal, state, and physician rights interfere with the rights of pregnant women. Due to difficultly in defining these rights, no clear guidelines exist. The issue is mostly decided on the basis of already present scientific research and ethical judgments of the presiding judge.

Though it is your legal right as to how and when can you terminate your pregnancy, if you choose to, it is still very much in control of the states despite clear rulings of the Supreme Court.

States often enact Targeted Regulation of Abortion Providers laws, commonly known as TRAP laws, which restrict access to abortion. For example, a recent Texas law (also in ten other states) insisted on higher building standards and doctor privileges in a nearby hospital, for abortion clinics.

States also use other measures of controlling abortion like, mandatory waiting periods (up to 72 hours) from the first consultation to the actual abortion time, or asking physicians and doctors to brief their patients about complications of abortion at the time of consultation. Pro-choice people see these measures as a scaring tactic whereas the pro-life campaigners explain them as safety measures for women.

States and physicians’ rights can often extend over the rights of a woman in instances like prohibiting the use of recreational drugs during pregnancy or laws requiring forced testing for some medical condition, if a physician is suspicious and the woman is declared negligent.

An example of a similar incident was the case of Samantha Burton, who was admitted to Tallahassee Memorial Hospital (TMH) when her uterus membranes ruptured at 25 weeks of pregnancy. When she tried to leave, after a prescription of inpatient bed rest, because of two young children at home and her job, the hospital barred her exit. A court order obtained by the hospital made her stay and denied her request to change hospitals. The doctors were given full autonomy to make health decisions for her and her baby. A dead fetus was delivered by cesarean section in a matter of days after the court order was given.

A study conducted in 2007 showed that nearly 51% of the surveyed doctors and health lawyers were highly likely to support the use of legal system to force a patient to undergo caesarian section which they did not want.

Though such orders seem frightening, the forced care advocates say that mother’s rights should be balanced with that of the fetus, and that the women carrying the fetus have responsibilities towards its care and well-being.

Others argue as to why pregnancy should diminish a woman’s rights over her own body. When a person cannot be forced to do something to save the life of another human being (even when their life is at stake), how can a person’s rights be violated for a fetus that is not even born yet? However, both sides agree that even in such processes of forced medical care, “due process” in a legal court room is still important.

On the other hand, laws concerning the custody of an embryo or fetus outside human body is a whole other matter. Scientific advances in genetics and medical sciences have also left the legal system lagging behind. Currently, complex disputes are being mostly handled through court decisions, on case to case basis, like the recent case of custody for fertilized embryos of celebrity actress Sofia Vergara and her ex-partner Nick Loeb.

The case is ongoing and no decision has been reached by the court yet. The ex-couple has two fertilized embryos. Now that the couple has broken up, who will get the embryos? Will they be destroyed? Does the egg donor have higher claim to the embryos or the sperm donor, now that the embryo exits outside the women’s body?

Another important case published in the New England Journal of Medicine narrates the story of Marlise Muñoz, 33 at the time, who collapsed from a massive pulmonary embolism. Initially alive, on reaching the hospital she was pronounced brain dead while being 14 weeks pregnant.

The family requested the end of life support. The hospital refused on the grounds of the Texas law which states a “person may not withhold cardiopulmonary resuscitation or certain other life-sustaining treatment designated… under this subchapter (the Texas Advance Directive Law)… from a person known to be pregnant.” The judge after hearing arguments directed the hospital to terminate end of life support, citing that the law was not meant to be applied to people who were dead, ordered the hospital to stop providing life support to the patient. Ms Muñoz was 22 weeks pregnant at the time of retrieval of life support. The court did not comment on ‘whether limiting end-of-life decision making in pregnancy is constitutional’.

Literature and history are full of such controversial cases and questions which raise a lot of moral issues to be addressed.

Discussions like these can venture into morally murky grounds and can easily allow you to get lost in hypothetical situations, but these questions are noteworthy and can create an environment which ultimately helps broaden the limited discussion about the rights of women and the fetus, which is often confounded by abortion politics.

These cases are also important to understand and learn lessons from due to multitude of reasons as the decisions of such cases can then serve as precedence for future. Secondly, only by understanding these issue can you develop your own ideas and beliefs about the subject and make informed decisions about your reproductive health, as only aware women can claim their rights. Most importantly, understanding your own rights gives you a feeling of satisfaction and in turns empowers you to take action when needed to enjoy these rights.

Our advice: research your reproductive rights extended to you by your state and country, understand them, analyze them, and make efforts to change them if you do not like them. The only thing you should not do when it comes to rights over your own body is ignore them.

Huda Munir is an epidemiologist with expertise in public health policy. She is interested in writing about global public health issues and policy trends. Huda is also an information junkie and loves to read 'everything'. Her idea of fun includes a cup of tea, five minutes of silence, a long walk with a good book, and definitely the John Oliver Show.

Women Who Have Sex More Often Have Better Memory

Is Brilliance Really A Male Trait?

Do You Know Women Live Longer Than Men?

Female Hormones—All You Need To Know

US Records Highest Single Day Coronavirus Cases Since the…

Steroid Pills or Inhalers for Asthma May Increase Risk of…